In its editorial, the paper says that if Beijing were to deploy the People's Liberation Army, which has a garrison in Hong Kong, it would be an expression of overkill.

NEW DELHI (THE STATESMAN/ASIA NEWS NETWORK) - After several weeks of the upheaval in Hong Kong, China's intervention on Monday (July 29) in the face of violent developments in its protectorate has been remarkably robust.

This was not wholly unexpected as the movement has targeted a piece of legislation that provided for extradition of the disaffected to the mainland.

Though implementation of the legislation has been kept in abeyance, the groundswell of opposition to the proposed extradition has not lessened.

The situation, on the contrary, has exacerbated considerably.

In a rare signal from Beijing, the government of the People's Republic has offered its full support to Hong Kong's chief executive, Carrie Lam, and the island nation's police force, saying the violent protesters must swiftly be punished.

The popular angst is now directed against the police who have been accused of using excessive force.

Having retained its patience for a while, before Sunday's confrontation between the protesters and the police, China's imprimatur lends a new dimension to the upheaval.

On closer reflection, Beijing had held its fire even during the peak of the Umbrella movement in 2014. Democracy is at a discount as never before.

Hong Kong has been roiled by two months of escalating pro-democracy protests that have posed the most significant challenge to Beijing's authority since the former British colony was returned to Chinese rule in 1997.

Further comment must await the impact of China's intervention. For the moment, Ms Lam and the establishment have been assured of support. 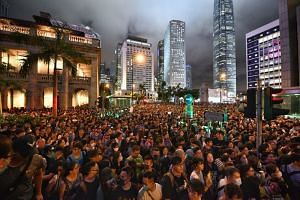 Hong Kong at a crossroads

The ongoing violence, which in China's perception has been spearheaded by the radicals, has seriously undermined Hong Kong's prosperity and stability.

Protesters have also focused their anger on the alleged collusion between the authorities and "triads", Hong Kong's organised crime groups. Palpably enough, 22 years after the handover, the people's movement has gone beyond the legislation and extradition.

With both in abeyance, the scope of the upheaval has been expanded arguably in an effort to sustain the spirit.

The government has denied rumours of China's involvement in the government's counter-mobilisation as "unfounded and insulting".

It is profoundly significant that at the first press conference since 1997, the state council's Hong Kong and Macau affairs office described the protests as "horrendous incidents" that have caused "serious damage to the rule of law".

Monday's remarks by government officials and The People's Daily, the official mouthpiece of the Chinese Communist Party, are the strongest statements Beijing has made since the mass protests began in June.

Small wonder there is speculation over how Beijing would respond and the possibility of escalation, including the deployment of the People's Liberation Army, which has a garrison in Hong Kong.

But that would be an expression of overkill. It's time for restraint.