In his commentary, the writer commends Vietnamese vessels for protecting its exclusive economic zone ( EEZ) and driving away a Chinese survey vessel.

MANILA (PHILIPPINE DAILY INQUIRER/ASIA NEWS NETWORK) - Despite the Philippines having an edge over Vietnam with the 2016 arbitral court ruling that backed up our claims to parts of the South China Sea, it is Vietnam that has shown more brawn and determination in confronting China's hegemonic intentions in the area.

Since early July, according to a Washington-based think tank, Vietnamese ships have closely tracked Chinese vessels operating within Vietnam's EEZ, in the latest confrontation between the two countries in waters that are a potential global flash point.

"Ship tracking data show that China's survey ship has exited the Vietnamese EEZ for now, but at least two of its coast guard escorts remain in the area of the survey," Devin Thorne, senior analyst at the Centre for Advanced Defence Studies (C4ADS), was quoted by Reuters as saying, citing data from maritime analytics company Windward.

The survey ship, operated by the China Geological Survey, has been conducting what appears to be seismic surveys of Vietnam's offshore oil blocks, the report said.

Vietnamese ships pursued Haiyang Dizhi 8 as it returned to Fiery Cross Reef; the Chinese vessel now appears to be "loitering just outside of Vietnam's EEZ," said the report. China has reclaimed Fiery Cross Reef and built military installations on it that can threaten peace and stability in the region. The reef is also claimed by Vietnam and the Philippines.

The Philippines can learn a lesson from Vietnam. Without the use of force, with its vessels just standing by and protecting its EEZ, it was able to drive away a Chinese survey vessel.

Contrast this to what the Philippines has done over China's steady incursions into our territorial waters. When hordes of Chinese vessels entered the waters off Panatag Island, as reported by Defence Secretary Delfin Lorenzana, Foreign Secretary Teodoro Locsin Jr said he "fired off" diplomatic protests against China. 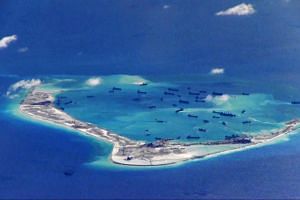 Locsin said the same thing about previous Chinese incursions. But we never heard from him as to what eventually happened to these protests. Did Beijing reply or explain its side? Or did Beijing just ignore our protests, like what it did to the arbitral ruling?

While Vietnam has been overzealous in protecting its EEZ, President Duterte has announced that Chinese fishermen can fish in our EEZ since, according to him, China has claimed almost the whole of the South China Sea. He also said that this was his verbal agreement with Chinese President Xi Jinping.

What Mr. Duterte has, in fact, done was to adopt a modus vivendi in the contested waters, allowing all claimants to fish pending the settlement of the conflicting claims.

But Vietnam is different. Despite its being a small country, it has time and again stood up against its giant neighbor. It has already gone to war with China in the past, including engaging in several deadly naval skirmishes in the South China Sea.

If ever China decides to test its newly acquired military hardware, Vietnam, Beijing's longtime object of animus, would most likely be the target.

In his analysis carried by the online magazine The Diplomat, Derek Grossman, a senior defence analyst at the nonprofit policy think tank RAND Corp, said that if the regional situation were to warrant use of force, then Vietnam would be the "preferred warm-up" by China's People's Liberation Army (PLA), because it would offer the military much-needed combat experience in the air and naval domains, without the threat of US intervention, and in a winnable situation.

Unlike the Philippines, which has a mutual defence agreement with the United States, Vietnam has no military alliance with any country.

"No country other than Vietnam presents the PLA with such controlled and favourable conditions. As such, greater attention is warranted on the China-Vietnam relationship in the South China Sea in the future," said Grossman.

Alito L. Malinao is the former news editor of the Manila Standard. The Philippine Daily Inquirer is a member of The Straits Times media partner Asia News Network, an alliance of 24 news media entities.