SYDNEY (AFP) - A "merry-go-round" of extreme weather was hampering efforts by firefighters in Australia to tackle unprecedented bush fires that have killed at least 29 people and devastated vast swathes of the country.

Parts of the country welcomed heavy rainfall overnight, but authorities warned on Tuesday (Jan 21) that storms were bringing added complications, and the fire-danger risk could be elevated in the coming days.

"It has been a merry-go-round of weather over the last few days," the Bureau of Meteorology's Mr Kevin Parkin said.

"We have gone from fires and storms and floods, and giant hail - the size of limes... producing widespread damage - to fire danger escalating on our doorstep," the senior meteorologist added.

The country has suffered a collision of extreme climate events in the past week, with storms, lightning, thunder and hail battering areas in the fire-hit east.

The bush fire season has been made worse by climate change, experts say.

Victoria state experienced bursts of intense rain over the past 48 hours that helped to contain long-running blazes in some areas, but landslides, fallen trees and lightning strikes have hampered recovery efforts.

The temperature in Victoria is set to climb into the mid-30 deg C range on Wednesday amid fierce winds, prompting extreme weather warnings in the western parts of the state, where authorities say "new start" fires will be difficult to contain. 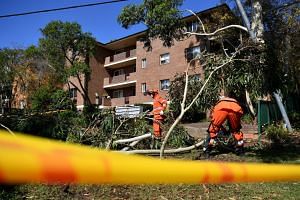 In Pictures: Australia, fatigued by bush fires, now finds itself hit by hail and dust storms

After fire, dust and hail play havoc on Australian summer

"If communities are not prepared for fire - whether they live or die, whether their property is saved or not saved - is very much dependent on decisions people make right now."

A change is expected to bring more rain to the state late Wednesday.

Further north in New South Wales state, heavy rains have also been welcomed in some areas but in others it has left fire-ravaged areas too damp to undertake preventative controlled burns.

The authorities there are bracing themselves for elevated fire danger on Thursday, when temperatures in parts of the state will tip above 40 deg C.