WELLINGTON (AFP) - The Pacific nation of Vanuatu has announced plans to ban disposable diapers, in a move it says will significantly reduce pollution.

He said research showed disposable diapers - or nappies as they are known outside North America - were the largest single item of household waste in the capital.

Vanuatu is one of several Pacific nations severely affected by climate change and prides itself on showing environmental leadership.

Last year, it became one of the first countries in the world to ban single-use plastic bags.

The nappy ban, which still needs final approval, is scheduled to begin on Dec 1 this year. 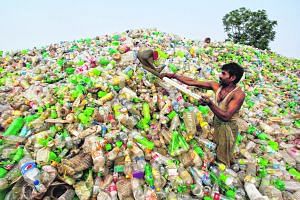 Disposable diapers pose an environmental nuisance, as they are lined with non-biodegradable plastic and use the chemical sodium polyacrylate as an absorbent.

The human waste they contain also leaches harmful chemicals into the environment, rather than going through the sewerage system to minimise its impact.

Critics say in addition to being a waste problem, the nappy manufacturing process also contributes to global warming.

However, parents find them far more convenient than old-fashioned cloth nappies, which have to be washed and dried.

Britain's Environment Secretary Michael Gove was forced to rule out a nappy ban last year after making off-the-cuff remarks seen as paving the way for prohibiting their use.

Parents groups described the potential ban as a backward step for women, who were most likely to have to shoulder the labour-intensive process of cleaning reusable diapers.

The environmental group Worldwatch Institute estimated in 2007 that 450 billion nappies are used globally every year.

They are also big business.

A report by US market research firm Grand View Research last year said the global baby diaper market was worth US$45.08 billion (S$60.8 billion) in 2016 and would grow to US$64.62 billion by 2022, amid rising demand from emerging nations such as China, India and Brazil.

Modern reusable nappies are easier to use than the traditional white towelling square, with many featuring biodegradable inserts and velcro fastening rather than safety pins.