SYDNEY (BLOOMBERG) - The US, Japan and Australia agreed to invest in infrastructure projects in the Indo-Pacific in a move that will be seen as a counter to China's rising influence in a region that stretches from the east coast of Africa, through Australia to Hawaii in the Pacific Ocean.

"This trilateral partnership is in recognition that more support is needed to enhance peace and prosperity in the Indo-Pacific region," Australia Foreign Minister Julie Bishop said on Tuesday (July 31) in an emailed statement.

The pact will mobilise investment in energy, transportation, tourism and technology infrastructure, according to the statement, which didn't give any funding details.

The announcement comes after US President Donald Trump's National Security Strategy in December called for policies to answer rival powers' infrastructure-building efforts. Chief among these is Chinese President Xi Jinping's Belt and Road Initiative, a global plan to build or expand highways, railways, ports, pipelines and power plants that Morgan Stanley forecasts could grow as large as US$1.3 trillion over the next decade.

US infrastructure cooperation with Japan and Australia would dovetail with the Trump administration's evolving national security policies, which have cast the US as in "long-term, strategic competition" with China and Russia.

Beijing's BRI calls for half a trillion dollars in investment in infrastructure along trade routes to China, which is expected to overtake the US as the world's largest economy before 2030.

Before visiting China in November, Trump signed two deals with Japan, pledging cooperation on infrastructure projects in the region.

Secretary of State Michael Pompeo, speaking Monday before a trip to Asia amid an escalating trade war with China, said the US believes in "strategic partnerships, not strategic dependency" - a veiled criticism of Beijing's efforts to woo countries with cheap financing for infrastructure projects.

"With American companies, citizens around the world know that what you see is what you get: honest contracts, honest terms and no need for off-the-books nonsense," Pompeo said.

Another advantage of the US is that "we will help them keep their people free from coercion or great power domination," he said.

Pompeo is likely to make announcements about the pact's funding arrangements during his visit to Asia, which will include Malaysia, Singapore and Indonesia, according to Stephen Kirchner, director of trade and investment programme at the US Studies Centre at the University of Sydney.

"This is designed to provide mechanism that will allow more private-sector funding for the infrastructure projects that countries in this region need," Kirchner said.

That will mean it will operate in different ways to established funds such as the World Bank and Asian Development Bank, he said.

In February, Bishop said the three nations, along with India, had discussed opportunities to address "the enormous need for infrastructure" in the region, which encompasses some of the world's poorest as well as fastest-growing economies.

India wasn't mentioned in Tuesday's announcement. Instead, the pact will be organised by the US' Overseas Private Investment Corp., the Japanese Bank for International Cooperation and Australia's Department of Foreign Affairs and Trade. 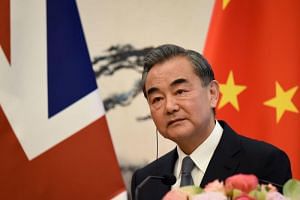 "This partnership represents our commitment to an Indo-Pacific region that is free, open and prosperous," the three nations said in a joint statement issued on Monday, according to Bishop. The trilateral partnership will be formalised "in due course," Bishop said.

Australia's diplomatic relationship with China, its most important trading partner, has been strained since December when Prime Minister Malcolm Turnbull said Chinese meddling in the nation's government and media were a catalyst for new anti-foreign interference laws, which passed parliament last month.

Australian Trade Minister Steve Ciobo denied the new pact was designed to counter China and said he wasn't expecting a backlash from Beijing.

"Why would there be any?" Ciobo said in a Sky News interview on Tuesday.

"The fact is that we demonstrate consistently that Australia is very focused on making sure we can help the least-developed economies in our region."