CANBERRA - Toxic smoke from Australia's severe bush fires has forced the closure of two universities popular with foreign students as well as some government departments in the capital Canberra.

On Monday (Jan 6), the Australian National University (ANU) ordered the closure of the campus for 48 hours.

The University of Canberra nearby said on Sunday it would close for 48 hours as well.

"Due to the hazardous smoke conditions across the ACT and surrounds, intermittent power outages, and ongoing threat of fire, we have decided to continue to keep the Acton, Mt Stromlo and Kioloa campuses closed to all but essential staff and those staying in residences. We are closed Monday 6 and Tuesday 7 January. Please don't come onto campus," the notice on the ANU website says. ACT is the Australian Capital Territory.

The university said it was working on re-opening on Wednesday.

The federal Department of Home Affairs closed its Canberra offices and ordered non-essential staff to stay home, as businesses and workplaces across the ACT assess the impact of thick bush fire smoke on workplace safety, The Canberra Times reported on Monday.

Critical and operational frontline personnel were being advised on alternative arrangements, including relocation to other areas where the air quality is better, or working remotely from home, the department said.

Tourist sites such as the National Gallery of Australia were also closed.

Large fires burning on the south coast of New South Wales, to the north and to the south of Canberra have smothered the city in recent weeks, sending its air quality deep into hazardous territory and triggering widespread health concerns.

Canberra has in the past week recorded some of the worst air quality in the world.

On Monday evening in central Canberra, the PM2.5 air quality index (AQI) stood at 615 based on a rolling 24-hour average, according to the ACT Health department website. A level of 200 is hazardous. 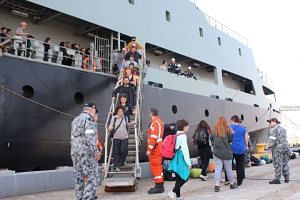 At midnight on Sunday local time, the PM2.5 AQI was 3,435 and improved steadily during the day, but the local government said a wind change could see conditions worsen again later in the week.

According to The Canberra Times, 100,000 P2 masks released by the federal government from its pandemic stockpile would be available from all community pharmacies from Tuesday morning. Across the ACT, many commercial outlets had sold out.

At Canberra airport, residents and visitors were getting flights to other places where the air quality was better.

Those flying out on Monday included parents with babies, the elderly and people with asthma.

Intensive-care nurse Winnie Lai and her 2½-month-old daughter Chloe were getting a flight to Melbourne to stay with Mrs Lai's sister, The Canberra Times reported.

The father Ten Lai, who is a student at ANU and is staying on, said: "We are quite worried that this will cause permanent damage or temporary issues."

Ms Lai did not know how long she would stay with her sister in Melbourne.

"It feels like Mad Max here," Mr Lai said, referring to the film set in a dystopian future.