SYDNEY (Reuters) - The heaviest rain in years has fallen across parts of drought-parched inland Australia, bringing relief to struggling farmers but likely not enough water to break a big dry that has crippled the country's most productive farmland.

"I just got home when the rain hit the house," said Greg Lawrence on the phone from 9 Mile Station, a sheep run just north of Broken Hill, a town 940 km west of Sydney.

"I got inside and yeah, I had a stubbie," he said, referring to a bottle of beer.

"Our house dam dried up last week and it's chock-a-block full now ... it just puts a spring in your step straight away and takes that pressure off."

The Bureau of Meteorology said falls of up to 25 mm were recorded at towns across New South Wales state over 24 hours to Thursday (Oct 4) morning, while thunderstorms dumped 34 mm on Broken Hill and 50 mm on Menindee, 100 km to its east.

The falls, though, will need to be followed up with more rain to break a drought has gripped a swathe of Australia's southeast, turning pastures barren and driving graziers to buy in expensive grain to keep their herds alive.

Wheat production has been cut to its lowest in a decade, the wool clip and wine crush are set to drop, and crop protection company Nufarm Ltd last month reported an annual loss as farmers without crops pass on its products. 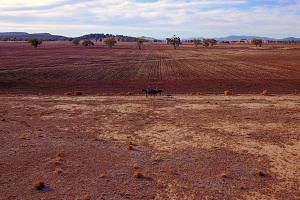 Australia drought 'far from over' despite widespread, significant rain

Conditions at Broken Hill were so dry that the storm drove ahead of it a huge cloud of orange dust, enveloping the city before the heaviest daily fall since 2016.

"It settled the dust for a little bit, but you can see the sky's getting brown again with the wind," said Kerry Bourke, at Wonnaminta Station 220 km north of Broken Hill.

The rain is forecast to sweep east over Thursday and in the days to come, bringing expected falls of more than 25 mm over grazing and crop lands between Broken Hill and the coast.

But the rest of spring and December are still predicted to yield below-average falls, according to the weather bureau. Last month was the driest September recorded since 1900.

"It's welcome, but the deficiencies have been so big for so long now that a single event is not going to fix it," said Phin Ziebell, an agribusiness economist at National Australia Bank in Melbourne.

"You'll take the rainfall, but I don't think it will change the cropping outlook ... to get back to where we want to be you'd need some significant follow up rain for sure."