More than 1,000 tourists and residents have been evacuated from the small seaside town of Kaikoura by a fleet of helicopters and a New Zealand naval vessel since the 7.8-magnitude quake struck early on Monday.

Kaikoura, a fishing town and popular whale-watching base ringed by steep mountains, was completely cut off by landslides covering the coastal road and rail corridor.

Further helicopter evacuations from Kaikoura on Thursday had been disrupted due to the bad weather, said Ms Sarah Stuart-Black, director of the Ministry of Civil Defence Emergency Management.

"We are really concerned about the changing weather situation," she told reporters. "It could mean that there's an increased risk of further landslides, obviously surface flooding, so we want people to be safe."

An inland road to Kaikoura, briefly reopened to emergency vehicles, was closed due to more landslides, officials said.

Warships from Australia, Canada and the United States, in the country for the Royal New Zealand Navy's 75th anniversary, had arrived in Kaikoura to assist with the recovery. 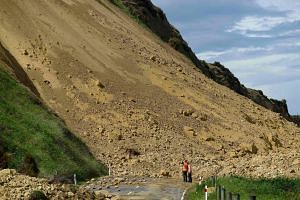 "The ships, crews and maritime helicopters provided by our partner militaries have given us a great deal of flexibility in supporting the national relief effort," said New Zealand Joint Forces Commander Major General Tim Gall.

Most of the tourists evacuated to Christchurch, the South Island's largest city about 150km south of Kaikoura, had continued their journeys but around 130 people were being housed temporarily in Canterbury University's student halls.

"These companies... are going to have a sustained reduction in their turnover to the point of almost nothing for a long period of time and that's why we think it's appropriate for the government to step in," Economic Development Minister Steven Joyce told reporters.

Analysts at ANZ Bank said that, while the local economic hit would be significant, there would only be a "small dent" in New Zealand's overall activity, far lower than the 2011 quake in Christchurch that killed almost 200 people.

In Wellington, as many as 60 buildings were damaged, including serious structural damage to three relatively recently constructed multi-storey buildings, one of which engineers said would have to be torn down.

The government said it would launch an investigation into why the newer buildings had been unable to withstand the quake.

More buildings were evacuated and roads cordoned off on Thursday as engineers assessed the damage.

Wellington is bisected by several fault lines, and large areas of its business district are built on reclaimed land, raising questions about building practices in the capital despite some of the world's strictest codes.

"It is a concern, people do want to know the buildings they're in are going to be safe," Wellington Mayor Justin Lester told reporters. "Everybody wants a building to perform as is expected, so when it doesn't... you need to understand how. There's no simple answer."

The force of the tremor was most evident in the upper South Island, where parts of the coast moved metres. A team of volunteers rescued thousands of abalone, a large shellfish known locally as paua, that had been thrown up from the sea bed and left high and dry.

A popular New Zealand fur seal colony near Kaikoura, where pups could often be seeing playing in a waterfall in a nearby stream, was destroyed by a landslide, Department of Conversation officials said.

Civil Defence evacuated some residents near several rivers in the region where landslides from the earthquakes had blocked the rivers and risked dangerous collapses.

Seismologists are still recording hundreds of aftershocks - some 2,000 have rattled the region since the initial tremor.

Government body Geonet Science estimated an almost one-in-three chance of another 7-7.8-magnitude quake hitting the wider region within the next 30 days.

"We stress to Wellington that we need to be prepared,"Geonet's Justin Lester said.