CHRISTCHURCH, NEW ZEALAND (AFP) - The bodies of six of the Christchurch massacre victims have been released to their families after an anguished-filled delay, New Zealand police said on Tuesday (March 19), but they warned only a fraction of those killed had been fully identified.

Police said that all 50 autopsies had been concluded, but only "12 victims have been identified to the satisfaction of the Coroner".

"Six of those identified victims have been returned to their families."

The delay has caused consternation among families of the dead, who would have liked to follow Islamic custom and bury their loved ones within 24 hours.

Mr Mohamed Safi, 23, whose father Matiullah Safi died in Al Noor mosque, earlier voiced frustration with officials for not giving grieving families any indication of when the bodies would be released.

"There's nothing they are offering," the Afghan refugee said outside the family support centre in Christchurch. 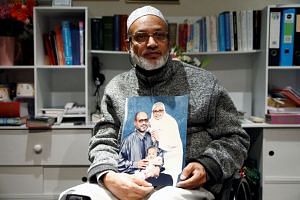 'I still love you': Christchurch survivor forgives his wife's killer

The police said they were "acutely aware of frustrations by families associated with the length of time required for the identification process following Friday's terror attack".

"We are also looking at any way to improve our communications with the families and ensure they are kept fully informed about what is happening."

"We are doing all we can to undertake this work as quickly as possible and return the victims to their loved ones."