Prison officer Sashi Cheliah, who was born in Singapore, has been crowned the champion of reality TV show MasterChef Australia.

Both contestants scored the same points in the second round, but an outstanding first round with a lead of 16 points led Mr Sashi to victory with a total of 93 points out of 100.

The grand final challenge saw the two men try to recreate a complicated dessert by world-renowned chef Heston Blumenthal that is served at his restaurant The Fat Duck.

Mr Sashi's chicken lemak dish and pineapple tart with lime ice cream dessert propelled him past the semi-final of the cooking competition on Monday (July 30).

He moved to Adelaide six years ago, and was a police officer in Singapore for 12 years before moving to Australia.

According to an interview with The Straits Times in June, he started cooking regularly only when he made the move. 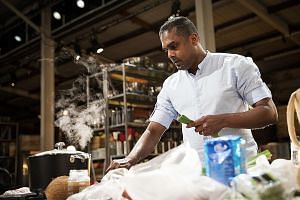 When he saw advertisements for MasterChef Australia Season 10 auditions pop up on Facebook, he decided to give the competition a shot.

His dream is to open a restaurant serving Indian and South-east Asian cuisine, with a mind on hiring ex-convicts.

"There are a lot of good courses in prison such as food-handling and pastry-making," Mr Sashi told ST in June.

"But employment after getting out of prison is very limited. It would be great if I could do something for the ex-convicts."