SYDNEY - Prime Minister Malcolm Turnbull has dismissed a media report that suggests Australia would use secretive defence facilities to help the United States in strikes on Iran's nuclear capabilities, asserting that he had "no reason" to believe an attack was imminent.

ABC had reported on Friday (July 27) that the United States is prepared to bomb Iran's nuclear facilities, perhaps as early as next month, citing senior ministers in the Turnbull government.

The report said that in addition to Australian facilities, British assets might be used.

ABC quoted a senior security source as saying there was a big difference between providing intelligence and analysis on Iran's facilities versus being a part of a "kinetic" mission.

"Developing a picture is very different to actually participating in a strike," the source said. "Providing intelligence and understanding as to what is happening on the ground so that the Government and allied governments are fully informed to make decisions is different to active targeting."

But Mr Turnbull dismissed the report as "speculation".

"I saw a story today claiming that, on the ABC, and citing senior Australian government sources," he said. "It's speculation, it is citing anonymous sources."

Mr Turnbull said that while Mr Trump's attitude towards Iran was well known, the report had not benefited from any "consultation" with his office, nor the offices of the defence or foreign affairs ministers, reported The Guardian.

A war of words between Washington and Teheran escalated dramatically this week as Iranian President Hassan Rouhani warned the US not to "play with the lion's tail". That provoked an all-caps tweet from Mr Trump that if Iran threatened the US again, it would suffer severe consequences.

Subsequently senior Iranian military commander Qassem Suleimani hit back at Mr Trump, comparing the US President to a gambler and cabaret owner and warning that Iran would be the one to "end" any war between the two countries.

Australia is part of the multilateral UKUSA agreement for intelligence sharing with the US, UK, New Zealand and Canada. The pact is also known as the "Five Eyes" agreement.

ABC reported that the little-known spy agency Australian Geospatial-Intelligence Organisation would also be expected to play a part in any potential strike.

"Australia is urging Iran to be a force for peace and stability in the region," she told ABC's AM programme.

"The relationship between the United States and Iran is a matter for them. What we are looking to do is to ensure that all parties embrace peaceful and stable principles to ensure that our region is safe," she said.

Asked whether Mr Trump's threats to Iran should be believed, Defence Industry Minister Christopher Pyne said: "Certainly President Trump has indicated that he's a person who's prepared to act in a way that previous presidents haven't." 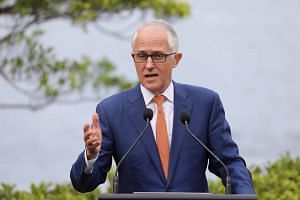 Earlier in the week, US Defence Secretary James Mattis had said Iran was a destabilising influence throughout the Middle East.

Speaking alongside Ms Bishop, Defence Minister Marise Payne and US Secretary of State Michael Pompeo at the AUSMIN meeting in San Francisco, General Mattis said the only reason that Syrian President Bashar al-Assad was still in power in Syria was because Iran had supported him.

"We see the same kind of malfeasance down in Yemen, where they're fomenting more violence down there. We've seen their disruptive capabilities demonstrated from Bahrain to the kingdom," said Gen Mattis.

"It cannot continue to show irresponsibility as some revolutionary organisation that is intent on exporting terrorism, exporting disruption across the region. So I think the President was making very clear that they're on the wrong track," he said.

President Trump pulled the US out of the landmark Iran nuclear deal in May and has warned all countries to stop buying Iranian oil by Nov 4. That has sparked an angry response from Teheran, which has threatened to block the Strait of Hormuz, through which one-fifth of the world's oil passes in tankers.