SYDNEY (AFP, DPA) - Crocodiles and snakes have been spotted in suburban streets in the north-east Australian city of Townsville, which has been hit by record-breaking rainfall and devastating once-in-a-century floods.

The floods have turned streets into rivers and forced thousands to abandon their homes in north-east Australia, with authorities warning of tornadoes and more rain over the next few days.

Authorities were late Sunday forced to open the floodgates at the nearby Ross River Dam, which had reached over 200 per cent capacity due to relentless downpours, inundating several neighbourhoods and threatening up to 20,000 homes.

Residents posted photos of crocodiles in the streets on social media and reported seeing snakes in the water.

Australia's tropical north experiences heavy rains during the monsoon season at this time of the year, but the recent downpour has surged far above normal levels.

Thousands of residents in the city of Townsville in Queensland were without power and cut off by flooded roads.

More severe weather could whip up tornadoes and destructive winds in the days ahead, Bureau of Meteorology state manager Bruce Gunn told reporters on Sunday.

"Atmospheric conditions are ripe for tornadoes and waterspouts around Townsville," the bureau said on Twitter. "Damaging to destructive winds are possible in these intense storm cells." 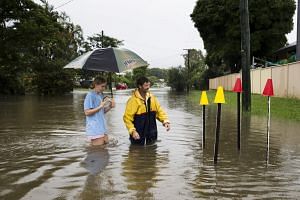 Landslides were reported with more possible in the worst-hit areas, the Bureau of Meteorology said Monday (Feb 5), warning of further “intense rainfall” and “significant flash flooding” along the eastern shore.

The Bureau of Meteorology said a slow-moving monsoonal trough was sitting above Queensland, with some areas expected to receive more than a year's worth of rain before conditions ease.

Bureau meteorologist Adam Blazak told AFP the heavy downpours could continue until Thursday, while floodwaters would take some time to recede even when the rains lessen.

The region receives an average of some 2,000mm of rain annually but some towns were already on track to pass that. According to the bureau, Townsville has already broken its record for the wettest seven days in a row, with 1,012 mm of rain falling by the end of Saturday compared to the previous record of 886 millimetres in 1998.

Meanwhile, the town of Ingham, north of Townsville, received 506mm of rain in 24 hours between Saturday and Sunday, of which 145mm fell in just one hour, Blazak said.

"I've never seen anything like this," Townsville resident Chris Brookehouse told national broadcaster ABC, adding that his house was flooded with water more than one metre deep.

"The volume of water is just incredible. Downstairs is gone, the fridge and freezer are floating. Another five or six steps and upstairs is gone too."

Blazak said that with adverse weather predicted to continue for up to 72 hours, some regions could see record-breaking levels of rainfall.

The national broadcaster ABC reported that thousands of homes had been abandoned in the suburbs of Townsville and that evacuations were being conducted.

There has been a silver lining to the deluge, with drought-stricken farmers in western Queensland welcoming the soaking.

"It is a welcome relief, especially in our western communities, to not only get the rain but also to fill up their dams," Palaszczuk said Sunday.

"We're getting food supplies in there. We still have many roads that are cut around those areas."

The deluge comes amid a severe drought in the eastern inland of the vast Australian continent, including parts of Queensland state, that has left graziers struggling to stay afloat.

Australia’s Bureau of Meteorology has forecast more rain, with up to 300 millimetres possible.

The flooding has stretched emergency crews to their limits. A spokesman for Queensland Fire and Rescue Services said early Monday it had received 1,000 calls for assistance in the past 24 hours.

Emergency services struggled to respond, carrying out 18 “swift water rescues” overnight, from Sunday to Monday. Around 400 Townsville residents have sought shelter at nearby Lavarak military barracks and the Red Cross is also assisting with the response and recovery effort.

Queensland Premier Annastacia Palaszczuk said Monday (Feb 4) that it had been a tough night. More than 200 people were still stuck and some 900 people were at evacuation centres, she said.  “One-in-a-century event – this is unprecedented. We have never seen anything like this before in Townsville,” she told Channel Nine.

“We have not yet reached the peak,” she added, saying there were fears the rain storm could form into a cyclone if it moves off the coast.  Local media reported that two policemen involved in evacuation assistance themselves became trapped after fast-rising flood waters washed away their patrol car. They clung to trees for half an hour before being rescued.

Palaszczuk warned the communities face more difficulties ahead. Schools and courts remain closed, more rain is on the way and emergency warnings still in effect for more than a dozen rivers. Schools, businesses and the airport in Townsville, which is regarded as a gateway to the Great Barrier Reef, remained closed on Monday.

Extreme heatwaves during the southern hemisphere summer have also led to maximum-temperature records being broken in some towns.

High temperatures are not unusual in Australia during its arid southern hemisphere summer, with bushfires a common occurrence.

But climate change has pushed up land and sea temperatures and led to more extremely hot days and severe fire seasons.

In the southern states of Victoria and Tasmania, firefighters in recent days have been battling numerous bushfires threatening homes and communities.