MELBOURNE (REUTERS) - Australia needs to cut carbon emissions more sharply to meet its 2030 Paris Climate accord target, the OECD warned on Wednesday (Jan 30), contradicting claims by the country's conservative government that the goal will be easily met.

Despite rapidly growing use of wind and solar power, Australia remains heavily dependent on coal and natural gas for energy, while emissions from the transport sector are growing.

That will make it tough for Australia, one of the 10 worst greenhouse gas emitters in the Organisation for Economic Cooperation and Development (OECD), to cut total greenhouse gas emissions by 26 per cent to 28 per cent from 2005 levels by 2030, as promised under the Paris agreement.

"Australia needs to intensify mitigation efforts to reach its Paris Agreement goal: emissions are projected to increase by 2030," the OECD said in a review of Australia's environmental performance.

"Adopting an integrated energy and climate policy framework for 2030 with an emission reduction goal for the power sector would avoid the projected rise in GHG emissions," OECD Secretary-General Angel Gurria said in the report.

The power sector is the country's biggest single polluter, accounting for a third of greenhouse gas emissions. 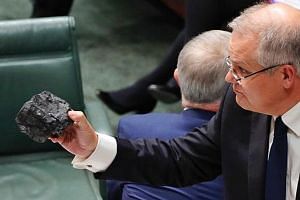 Australia waters down commitment to climate accord amid domestic political fight

The report comes five months after the right wing of the Liberal-National coalition government forced the ditching of a long-awaited comprehensive energy policy and ousted former prime minister Malcolm Turnbull.

His successor, Mr Scott Morrison, scrapped the effort to craft an integrated energy and climate policy to focus only on driving down power and gas prices.

Under pressure to do more from opposition Labor, the Greens and the country's Pacific island neighbours, which face the threat of rising sea levels from global warming, Mr Morrison has repeatedly said Australia will easily meet its climate accord target, as it had with the previous Kyoto accords.

"This is an ambitious target but... as indeed I have said on many occasions, we will meet our 2030 targets at a canter," Mr Morrison said on a visit to Fiji earlier in January.

The OECD urged Canberra to set an emission reduction goal for the power sector, use energy taxes and road pricing to better reflect the climate costs of fuel use, and increase investment in rail and public transport.