CHRISTCHURCH (WASHINGTON POST) - It was one of the defining moments as New Zealand grieved after a pair of deadly mosque attacks: a near-unanimous parliamentary vote in April to ban assault-style rifles and similar weapons.

The lawmakers' move was immediately acclaimed by gun-control advocates worldwide as an example of decisive collective action in a nation unified in horror by the March 15 assaults in Christchurch that left 51 people dead.

Then the momentum began to slow.

Growing opposition from New Zealand's pro-gun groups has complicated efforts to round up the now-banned firearms under a buyback programme. Lawsuits are threatened.

Gun-control advocates argue that compensation rates may not be fair and warn of a possible spike in black-market sales.

The government, meanwhile, is faced with a sobering set of challenges over how to enforce the new law.

There is no national registry for many of the weapons targeted by the ban, including the AR-15 - a semiautomatic rifle that has been used in mass shootings in the United States and is often at the centre of American gun-control debates.

As a result, estimates of the numbers of newly banned weapons vary widely. So far, about 700 firearms have been voluntarily surrendered.

The authorities are "operating a little bit in the dark", said Mr Joe Green, gun-safety specialist and former arms control manager for the New Zealand Police.

"It's really an open checkbook," he added, "because they don't know how many they are buying back."

The suspected gunman, Brenton Tarrant, 28, became the first person charged under New Zealand's post-Sept 11, 2001, anti-terrorism laws. His trial date is set for May 4 next year.

Meanwhile, the government of Prime Minister Jacinda Ardern is moving ahead with plans to further tighten gun controls. Measures could include a national firearms registry and a more comprehensive vetting process for gun ownership.

Gun groups and others are pushing back. 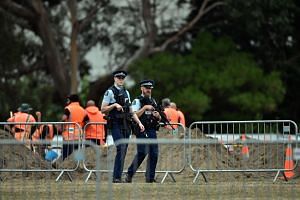 The Council of Licensed Firearms Owners, New Zealand's leading gun lobby, announced recently that it intends to challenge the buyback programme through the courts.

Ms Nicole McKee, the group's secretary, said the plan is "to take legal action, likely to be by way of a class action".

In a separate case, gun collector David Craze, who is also a hunter and competition shooter, said he is considering a lawsuit seeking proper compensation for what he described as "property confiscation".

Under the government's buyback programme, he would receive about 30 per cent of the actual value of his collection of dozens of firearms, amassed over 50 years, he said.

He had intended to sell some of the firearms as part of his retirement plan, he said, describing his collection as an "investment". Others have engaged in far more heated rhetoric.

Mr Paul Clark, owner of New Zealand Ammunition, one of the country's largest ammunition companies, said he believed many owners would attempt to hide their weapons.

He added that if owners are not allowed to make their case through the justice system, "the only alternative is revolution". Asked by Radio New Zealand journalist Lisa Owen to clarify what he meant, he replied: "Literally, what I just said." Mr Clark later apologised for the comment and said he was not calling for violence.

The government has set the buyback value at 95 per cent of the estimated base price for new or nearly new firearms. The amount is less for weapons in poorer condition.

There has been no indication from officials that the compensation rates will be increased, and an amnesty period expires on Dec 20.

Ms Philippa Yasbek, co-founder of Gun Control NZ, said it was likely that the low level of voluntary hand-ins so far was due in part to people "waiting to see the levels of compensation on offer" before details were revealed.

Mr Stuart Nash, the minister for police, announced last week that nearly 200 collection events would take place over the next three months in community hubs, including in some of the country's largest sports stadiums.

"We acknowledge that you're a law-abiding citizen and through no fault of your own you now find yourself in possession of firearms that are now illegal," he said, but he noted that once the amnesty period expires, there is no excuse for holding on to weapons.

The authorities, who estimate that there are 1.2 million to 1.5 million firearms in New Zealand, have written to every registered firearms owner to inform them of their obligations, he said.

But Ms Yasbek pointed out that some of the banned weapons, including AR-15 rifles, fall into Category "A" in the New Zealand licensing system, which means they were not required to be registered in police databases and hence will be impossible to trace.

"These weapons are unlikely to be confiscated by police because they don't know of their existence," she said. "These will become black-market weapons if their owners choose not to comply with the law and become criminals instead."

She added that the new law requires tightening to increase public safety. This would include a mandatory gun register, records of all ammunition sales and requiring owners of those semiautomatics that remain legal to permanently disable their guns.

"Despite any potential difficulties with the buyback, it is really important that we remove semiautomatic weapons from the community," she said.