WELLINGTON (AFP) - New Zealand opposition leader Jacinda Ardern conceded she needed more time to win over wavering voters on Friday (Sept 22), as parties made their final pitches in what has been a rollercoaster election campaign.

Ardern electrified the contest when she took over the centre-left Labour Party last month but opinion polls have showed "Jacinda-mania" fading in the lead-up to Saturday's election.

"I'm sure it's had an impact, that's why it's so disappointing," she told reporters. "It's been politics as usual, it's not what I wanted this campaign to be about."

English, who is seeking a fourth term for his conservative National Party, has relentlessly attacked Ardern's financial credibility while pointing to his economic record over the past nine years.

Arden said the seven weeks she had to introduce herself to voters was not enough and she "would have liked more time". 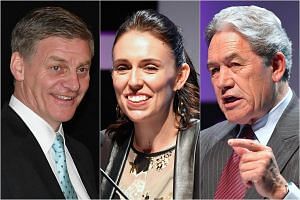 "I know there are voters out there who'll be thinking (they need) just a little bit more time to know me and my leadership," she said.

Ardern has appealed strongly to the youth vote, putting issues such as the environment, housing affordability and education on the agenda.

English acknowledged New Zealand had "significant issues" that needed to be dealt with.

"The best way to do that is party vote for National, because it'll keep the economy moving along and give us the best opportunity to address the issues," he said.

If the polls are correct, both Labour and National will need the support of New Zealand First, led by populist anti-immigration campaigner Winston Peters, to form government.

English said he had not spoken to Peters because National was still focused on maximising its own vote.

"I don't think Mr Peters would be expecting a premature call like that, we'll see what the voters give us," he said.

Meanwhile, there was a sombre note to Ardern's final day of campaigning as she took time out to attend the funeral of her grandmother, who died on Monday.

"My grandmother was a wonderful woman, I know she would have loved to have been here for tomorrow," she said.