WELLINGTON (AFP) - Colander-wearing members of the Church of the Flying Spaghetti Monster could soon be legally married in New Zealand after the church was approved to hold "Pastafarian" marriage ceremonies.

Church adherents, who wear colanders on their heads, revere pirates and believe the universe was created by a flying noodle, have been recognised in New Zealand as a bone fide organisation.

Their right to nominate marriage celebrants was approved on Dec 10 and the church head, the "Top R'Amen", was reported on Sunday (Dec 20) saying she had filed her application and hoped to begin conducting Pastafarian weddings next month. 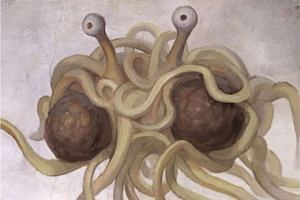 Five things about the Church of the Flying Spaghetti Monster

The woman, who requested anonymity, earlier told Radio New Zealand it was only right that marriages in the Church of the Flying Spaghetti Monster be recognised.

"We are a bone fide church and our people do like to get married, some of them several times," she said.

"We like to have baptisms and babies and celebrations and divorces and it's always nice to have an official marriage celebrant to preside over these celebrations."

The wedding feast would be pasta, "the main holy meal", the Top R'Amen said, and the wedding dress distinctive.

"The colander is the traditional headgear but if you also wish to dress up as a pirate that's also approved because of course the first people that the flying spaghetti monster created were pirates."

Registrar-General Jeff Montgomery, who approved the Pastafarians right to apply to be marriage celebrants, told Radio New Zealand it was "one of the more unusual" requests he has received but they met the conditions of the Marriage Act.

"I have come to the view they do uphold or promote philosophical convictions and therefore are able to nominate marriage celebrants," he said.

Under New Zealand law, he said, an organisation would be granted celebrant status as long as they can demonstrate that they are promoting some philosophical or religious convictions.

"A marriage certificate won't actually have on it that a person has been married by a particular celebrant or particular organisation," he said.

The "Flying Spaghetti Monster" movement, which developed in the United States about 10 years ago, also believes there is a good beer volcano in heaven but the beer in hell is stale.

The church supreme leader is described on their website as "a heap of spaghetti appendages with two meatballs and a pair of eyes attached to the noodly body through a pair of stalks".