WASHINGTON (THE WASHINGTON POST) - Militant groups are using the attacks at two mosques in Christchurch, New Zealand, to spread a message of hate, pushing a narrative that says the West is at war with Islam and Muslims worldwide, security officials and experts say.

Al-Qaeda, the Islamic State in Iraq and Syria (ISIS) and other groups have cited the massacre, which left 50 people dead, in recent online appeals to supporters and potential recruits.

Some of the messages have included video footage the shooter apparently made as he arrived at one mosque and opened fire inside.

"And no one should be surprised when this attack is still a staple of jihadi propaganda and justifications for threats and incitements 10 years from now."

In an audio message posted online, the official ISIS spokesman, known by his alias of Abu Hassan al-Muhajir, accused the "nations of the Cross and apostate" of sponsoring the killing of Muslims around the world.

The scenes of death in Christchurch "were enough to wake the sleep" and incite supporters of the caliphate to take revenge, he said. 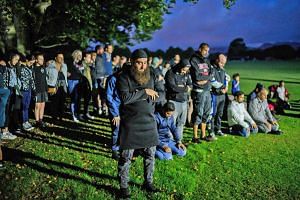 In another post, Abu Abdul Karim al-Gharbi, a senior member of Al-Qaeda, also called on supporters to exact revenge against "the countries fighting Islam".

Intelligence officials say the video of the killing of Muslim worshipers inside a mosque is an especially powerful way for the groups to spread extremist propaganda.

"Imagine how deeply emotional the video of this right-wing terrorist attack is to many people who have nothing to do with terrorism, then imagine what effect it might have on people who already think the West is at war with their religion," said a North African intelligence official, who like others spoke on the condition of anonymity because he was not authorised to speak in public.

The groups have highlighted the reactions of leaders and politicians in Western countries, describing what they say is a lack of empathy for Muslim victims in general and a double standard in the way terrorism is defined.

"What groups like ISIS and Al-Qaeda will do is they use what they see as shortcomings of Western leaders and societies after the Christchurch attack, in order to emphasise that Muslims are not equal citizens," a European security official said.

"We have picked up messages in jihadist chat rooms where the statements of President Trump and European leaders were interpreted as messages to Muslims that they are not worth as much as white non-Muslims."

After the shooting, United States President Donald Trump expressed his "warmest sympathy and best wishes" to the people of New Zealand in a tweet and decried "the monstrous terror attacks" that transformed "sacred places of worship" into "scenes of evil killing".

But when asked by a reporter whether he thought white nationalism was a rising threat around the world, he responded: "I don't really. I think it's a small group of people that have very, very serious problems, I guess."

Reached via a messaging app, a member of ISIS who uses the nom de guerre Abu Omar said the video would help recruit new people and was also being spread among already loyal fighters.

He also said the attacks were showing to Muslims that their lives were not worth much in the eyes of Westerners.

"How many people - leaders from all over the world, intellectuals - were requesting from Muslims to condemn Charlie Hebdo attacks. Heads of states - also a few of our weak Arab leaders - were marching in solidarity for what 11? 12? killed who have insulted our prophet? And now what? How many Muslims were killed 49? 50?? Who is marching? Who is making statements?"

A European security official said such messages could find recruits in a time in which populist and right-wing parties in European governments who have risen to power, many in part by using anti-Muslim slogans.

In Muslim communities in Europe, there is a general feeling of marginalisation and an impression that their loyalty is constantly being questioned and that they are under suspicion, he said.

Prof Thomas Renard, a senior fellow at the Egmont Institute, a Brussels-based think tank, said assuring Muslim communities their fears are being taken seriously and that all types of extremism are being dealt with forcefully will pose a challenge for Western governments.

"It is going to be a massive challenge to do it and to send signals that there is a willingness to tackle the far-right extremism," Prof Renard said.