SYDNEY - The smell of a rotting durian was enough to get a building evacuated in Australia on Saturday (April 28).

Hundreds of students were evacuated from a Melbourne library, as firefighters wearing breathing apparatus investigated the cause of a pungent stench which everyone thought had been caused by a gas leak.

Firefighters were called to the RMIT campus on Latrobe Street just after 3pm after a smell of gas was reported in the building, said a report in The Sydney Morning Herald.

Approximately 500 students and teachers were evacuated by Victoria Police as a precaution while an investigation was launched into the source of the smell, because the building was known to store potentially dangerous chemicals.

After a comprehensive search, firefighters identified the smell was not chemical gas, but gas generated from a durian, which had been left rotting in a cupboard.

Even when ripe, the durian is known as the smelliest fruit in the world and has been banned from subways and aeroplanes around the world.

Durians usually have a shelf life of three to six days when kept at room temperature. 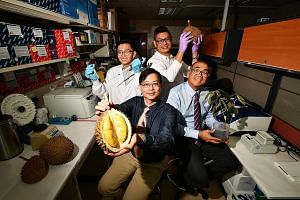 What causes a durian's pungent smell? Singapore scientists crack open its DNA to find out

A Metropolitan Fire Brigade statement said the smell had moved around the building via the air-conditioning system.

By 6pm the building has been reopened and firefighters were returning to the station.

The Environment Protection Authority would oversee the removal and storage of the waste, the Herald said.