WASHINGTON (WASHINGTON POST) - As deadly bushfires ravage swathes of Australia, the tale of Lewis the koala offered a glimmer of good news.

A grandmother of seven named Toni Doherty had spotted the confused critter dashing into the inferno last week, then in a dramatic moment that was captured on camera charged after him.

She emerged from the smoldering forest carrying the singed koala, swaddled in the shirt off her back. He wailed as she doused him with water.

But the rescue story didn't get the happy ending many had longed to see.

The Port Macquarie Koala Hospital said Tuesday (Nov 26) that its staff had made the decision to euthanize the wounded animal after surveying the extent of his injuries.

"We recently posted that 'burn injuries can get worse before they get better,'" the hospital said in a Facebook post. "In Ellenborough Lewis' case, the burns did get worse, and unfortunately would not have gotten better."

The koala Doherty had named "Lewis" is among hundreds of the beloved animals killed by the historic blazes in what one Koala Hospital official called a "national tragedy."

Rescuers trekking through the wreckage in search of survivors have discovered koalas burned to death in the eucalyptus trees where they had sought shelter.

Heart-wrenching images out of the country's eastern coast show those that survived clinging to rescuers, breathing through tubes and sipping from eye droppers, their fur burned in patches. 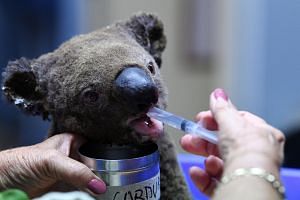 With 2.5 million acres burned, conservationists are concerned the still-raging fires could deal a blow to the koala population.

The Australian icon is already listed as vulnerable on the International Union for Conservation of Nature's Red List due to forest clearing, human expansion and climate change.

The fires have heightened fears about the future of the furry marsupial.

"They're in a lot of trouble, and they need our care and our help if they're going to survive," Noah Greenwald, the endangered species director at the Center for Biological Diversity, told the New York Times.

In Lewis' case, Doherty was driving through Port Macquarie when she saw the frightened animal dart across the road. She later said she was acting on instinct when she jumped out of her car to make the daring rescue, telling Australia's Nine News that he had looked "so defenceless."

Doherty described the koala's cries as "heart-rending," noting she "didn't realise they could cry out."

She hurried him to the Koala Hospital, which has raised nearly US$2 million to care for koalas hurt in the fire, far surpassing its goal of US$25,000.

The hospital hosted a reunion between rescuer and rescuee last week, bringing a new, international wave of attention to the story.

On Tuesday, Doherty returned to the hospital as Lewis was put to sleep.

"We are naturally very sad about this, as we were hoping he'd pull through," her husband, Peter, told Nine News. "But we accept his injuries were severe and debilitating and would have been quite painful."

Lewis the koala succumbs to his burns | Nine News Australia