CHRISTCHURCH - Witnesses told of the horror at Al Noor Mosque in Christchurch as a gunman burst in shooting at worshippers, mowing them down with automatic weapons fire. It was one of two mosques targeted in the city.

"I could hear screaming and crying, I saw some people drop dead, some people were running away," a man in a wheelchair who was at the mosque during the incident told news outlet TVNZ.

He said he had not seen his wife, who was also inside the mosque this morning.

He said the start of Friday prayers had been peaceful: "You could hear a pin drop.

"Then suddenly the shooting started. It started in the main room.

"I was in the side room, so I didn't see who was shooting but I saw that some people were running out to my room where I was in, I saw some people had blood on their body and some people were limping. It was at that moment I realised things were really serious."

"I tried to get out and I pushed myself out the back where my car was, and from there I heard the shooting, it went on six minutes or more." 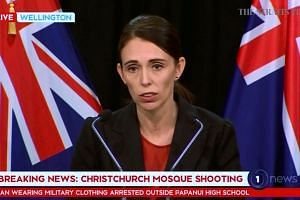 Another witness, Mr Len Peneha, who lives next door to the mosque, said he saw a man dressed in black enter the mosque at about 1.45pm local time and then heard dozens of shots, followed by people running from the mosque in terror.

He said the gunman ran out of the mosque, dropped what appeared to be a semi-automatic weapon in his driveway, and fled.

"I saw dead people everywhere. There were three in the hallway, at the door leading into the mosque, and people inside the mosque.

"It's unbelievably nutty. I don't understand how anyone could do this to these people, to anyone. It's ridiculous."

One teen witness said he ran as fast as he could, over the fence to Hagley Park opposite the mosque. "I didn't stop. The gunshots sounded like pop, pop, pop... I heard over 50."

A man, who wanted to be known only as Nour, told the Christchurch Star he crawled to safety during the shooting. He said he was in the front row when the gunman came in.

"First he shot people outside. Then he came in the front," he said.

He heard the gun being reloaded about three times.

The gunman began shooting in all directions. "I saw people drop dead in front of me. I was crawling to get away."

Nour said he crawled across the floor of the mosque to a window that had been broken by others as they fled and jumped through it.

He jumped over a neighbouring wall. He ran around the block and he could still hear shooting.

Mr Mohan Ibrahim described to the New Zealand Herald running for his life to escape the gunman. He was one of 200 people in Al Noor Mosque when he heard shots being fired.

"At first we thought it was an electric shock but then all these people started running."

He said there had been lots of people killed and many injured. 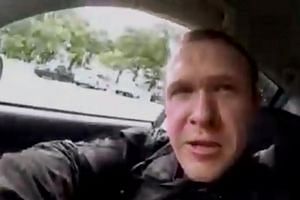 "I still have friends inside.

"I have been calling my friends but there are many I haven't heard from. I am scared for my friends' lives."

At separate shooting also occurred at Linwood Mosque in Christchurch.

Stuff.co.nz quoted witness Syed Ahmed as saying a man wearing a black motorcycle helmet and camouflage clothing, carrying what he thought was a black assault rifle with white writing, started "indiscriminate shooting" from outside the mosque.

"They were basically all shot."

He thought at least eight people had been shot, including at least three women and two of his friends. One of those killed had been shot in the head and remained inside the mosque, he said.

The man came through the front door "shouting something" but it "could not be heard over the screaming".

Mr Ahmed said he kept "low on the ground" and crawled to the storeroom before getting away.