MELBOURNE (REUTERS) - More than 10,000 homes in Australia's second most populous state were stuck without power on Monday (Jan 29) as a surge in demand amid scorching heat overloaded the grid, in the latest blow to the nation's stretched power sector.

The outages on distribution networks, which hit more than 50,000 homes on Sunday, came less than a year after Australia's biggest city, Sydney, was hit by blackouts during a heatwave, and 16 months after a state-wide outage in South Australia.

The latest blackouts, however, were caused by grid failures, rather than supply shortages, which had sparked a national debate over the nation's rush to adopt renewable energy at the expense of coal-fired generation.

Temperatures topped 40 deg C over the weekend in the state of Victoria, driving up power demand as homes cranked up their air conditioners and pool pumps and even forcing the Australian Open to close the stadium roof for the men's championship match on Sunday night.

Crews worked through the night to restore power, but some homes were likely to remain affected until Monday evening, United Energy, majority-owned by Hong Kong's CK Infrastructure Holdings, said.

"The prolonged high temperatures and humidity through the weekend ... resulted in multiple power outages," a United Energy spokesman said, adding that the main cause was fuse faults at overloaded substations.

The Australian Energy Market Operator (AEMO), which coordinates energy supply from power stations and has been monitoring supply after last year's failures, said there was ample supply over the weekend, when demand hit a record for a Sunday. 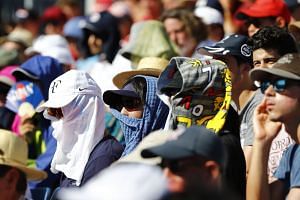 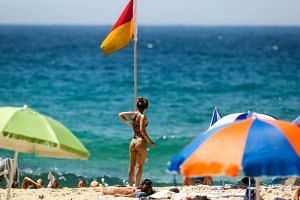 "It was a really good test," said AEMO spokesman Stuart Allott, adding that there was more than 1,380 megawatts of spare capacity when Victoria's demand peaked on Sunday.

The market operator came under pressure last year to beef up power supply after the closure of one of Victoria's biggest power stations, but Australia has weathered a searing summer so far with the help of more gas-fired power and a huge battery installed by Tesla in South Australia.

Victorian state premier Daniel Andrews warned that distribution companies may have to pay compensation to customers.

"We will work with companies and we'll compel them, if we have to, both to look at compensation and to look at improvements in that network," he told reporters on Monday.

Temperatures are set to drop in the coming days, but the next heat wave is expected in early February.