SYDNEY (Reuters) - Australian scientists said on Wednesday (April 20) that just seven per cent of the Great Barrier Reef, which attracts around A$5 billion (S$5.22 billion) in tourism every year, has been untouched by mass bleaching that is likely to destroy half the coral.

Bleaching of coral occurs where it expels living algae, causing it to calcify as a result of rising sea temperatures. Mildly bleached corals can recover if the temperature drops, otherwise the coral may die.

"We've never seen anything like this scale of bleaching before. In the northern Great Barrier Reef, it's like 10 cyclones have come ashore all at once," said Professor Terry Hughes, conveyor of the National Coral Bleaching Taskforce, which conducted aerial surveys of the World Heritage site.

"Our estimate at the moment is that close to 50 per cent of the coral is already dead or dying," Hughes told Reuters. 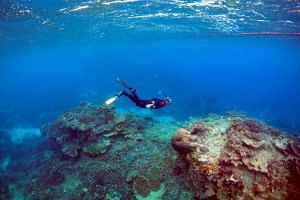 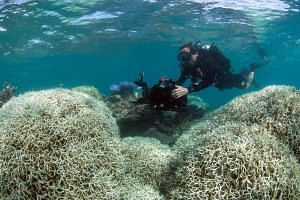 Although the impact has been exacerbated by one of the strongest El Nino's in nearly 20 years, scientist believe climate change is the underlying driver of bleaching.

Unesco's World Heritage Committee last May stopped short of placing the Great Barrier Reef on an "in danger" list, but the ruling raised long-term concerns about its future.

Australia is one of the largest carbon emitters on a per capita basis thanks to its reliance on coal-fired power plants.

US President Barack Obama embarrassed host Australia 18 months ago at Brisbane's G20 Summit by warning of the risk of climate change to the reef.

The report will likely place additional pressure on Prime Minister Malcolm Turnbull ahead of likely federal elections on July 2.

Turnbull, who ousted Tony Abbott in a party coup last year, is a carbon-trading advocate who supports progressive climate policies, but has disappointed some with his failure to strengthen the ruling Liberal Party-led coalition's commitment to addressing climate change.