New Zealand this month recognised the Church of the Flying Spaghetti Monster as a bonafide organisation and said it can carry out wedding ceremonies in the country. Church followers wear pasta strainers or colanders on their heads and call themselves Pastafarians. They believe a flying spaghetti created the universe and that pirates were the original Pastafarians.

Here are five things about the Church of the Flying Spaghetti Monster: 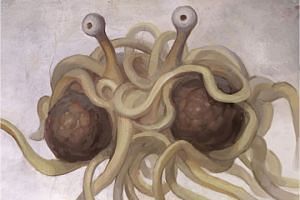 The oddly named church began in the United States a decade ago when founder Bobby Henderson wrote a satirical open letter opposing the teaching of evolution and intelligent design - the idea that the universe has a creator - in Kansas schools.

While it is generally seen as a parody religion, Simon Cuthbert, an appointed minister of the church, says the church should be taken seriously, the ABC reported.

Mr Cuthbert told the Australian media that the church is represented by the Flying Spaghetti Monster, a supreme being, adding that the deity is a "wonderful carbohydrate, there's some protein there as well but he's an all-seeing, all-knowing type god but he doesn't discriminate against anyone."

Last month, Lindsay Miller from Massachusetts in the US won the legal right to wear a pasta strainer on her head as a religious headgear for her driver's licence photo.

Ms Miller said: "As a member of the Church of the Flying Spaghetti Monster, I feel delighted that my Pastafarianism has been respected. While I don't think the government can involve itself in matters of religion, I do hope this decision encourages my fellow Pastafarian Atheists to come out and express themselves as I have."

The church on its website claims it has "millions, if not thousands, of devout worshippers" around the world.

Its most loyal followers are European university students who hold meetings and gatherings dressed as pirates.

The image of several strands of spaghetti wound around meatballs represents the Spaghetti Monster. Its most widely used representation is this image superimposed on that of God in Michelangelo's painting The Creation Of Adam. Another one that is used is a version of the fish emblem, similar to the Christian Ichthys symbol for Christ. As described on their website, it is "a heap of spaghetti appendages with two meatballs and a pair of eyes attached to the noodly body through a pair of stalks".

The Pastafarian concept of heaven includes a beer volcano and a stripper factory. In hell, the beer is stale and the strippers have sexually transmitted diseases.

5. Every Friday is holy day

Followers celebrate every Friday as a holy day where they end their prayers with the word "Ramen", which is similar to "Amen". They also celebrate a vaguely defined holiday, with no specific date and in any manner as they please, named "Holiday" around the time of Christmas, Hanukkah and Kwanzaa, as well as other holiday parodies such as "Pastover" (Passover) and "Ramendan" (Ramadan).