Moderate Turnbull, 63, was ousted a week ago in a Liberal party coup driven by a hardline conservative faction and he indicated at the time he would not move to the backbench.

"Malcolm Turnbull's retirement draws to a close 14 years of committed service to the Australian people and his beloved electorate of Wentworth, culminating in his term as prime minister," he said.

"The Liberal Party thanks him for his commitment to our values and calm stewardship of our great institution, even in times of difficulty."

Turnbull was unseated after almost three years by a determined challenge from his own Home Affairs Minister Peter Dutton, who himself lost out to a stealth campaign by Morrison, a Turnbull ally, in a party ballot.

His transition to civilian life should be smooth. Turnbull was one of Australia's wealthiest parliamentarians and he went to Canberra after previous stints as a journalist, banker, lawyer and businessman. 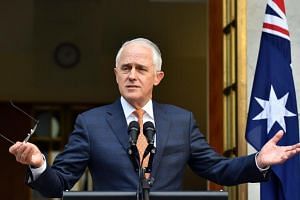 His departure will trigger a by-election for his Sydney seat, potentially in early October, leaving Morrison in a precarious position with no majority for two sitting weeks of parliament.

The seat is traditionally a Liberal safe haven, although a backlash against the government's political infighting could make this less certain.

Several Liberal candidates have already emerged, including former Business Council of Australia executive director Andrew Bragg and Dave Sharma, who used to be ambassador to Israel.

The Greens and Labor are also expected to field candidates.