WELLINGTON (AFP) - China's ambassador to Samoa on Tuesday (Aug 20) labelled critics of Beijing's activities in the Pacific "ignorant" and "prejudiced", in the latest testy public missive from the Chinese diplomatic corps.

Beijing's growing influence in the Pacific islands was a major theme at a tense regional summit in Tuvalu last week, where Australia tried to reassert leadership in an area it traditionally regards as its sphere of influence.

Instead, Canberra faced criticism over its lack of action on climate change, with leaders like Fijian Prime Minister Frank Bainimarama saying they preferred China's brand of diplomacy to "condescending" Australia.

"Rather than pointing fingers at China's good deeds, those who keep on making groundless accusations and speculations might as well do more themselves to provide help to the Pacific island countries," Chao wrote in the Samoa Observer.

"Some people questioned the purpose of China's aid, even disregarded the facts and fabricated the so-called 'China debt trap' - this is either of prejudice or ignorant of China's foreign aid policy."

China's aid comes largely in the form of low-interest loans, but critics say it leaves debtor nations beholden to Beijing, eroding their independence. 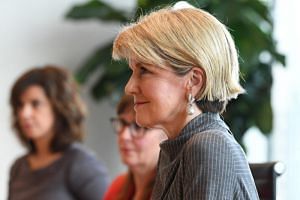 Chao's response in the Observer was blunt: "The so-called 'China debt trap' is extremely ridiculous."

"China's foreign aid... comes without interfering in their domestic affairs or attaching any political strings," he wrote.

Australia, the largest aid donor in the Pacific, is wary of China's interest in the region, fearing the long term goal is to establish a military base in the islands.

But Chinese diplomats have also been determined to have their voices heard in the region, sometimes pushing their cause aggressively.

And during last November's Apec meeting in Papua New Guinea, police were called in when Chinese officials "tried to barge in" to the-then foreign minister Rimbink Pato's office to have their say on the summit's communique.

A few months earlier at the 2018 Pacific Islands Forum, host nation Nauru demanded an apology after the head of China's delegation walked out because he was not allowed to speak before the island leaders who were holding the summit.

"Their enemies (Australia and its allies) are not our enemies," he said.