SYDNEY (WASHINGTON POST) - Chinese students poured into Australia and New Zealand in the hundreds of thousands over the past 20 years, paying sticker prices for university degrees that made higher education among both countries' top export earners.

Now, as a more authoritarian China projects its influence deeper into the South Pacific, attempts by Chinese students and diplomats to interfere with anti-Beijing dissidents and stifle free speech on campus pose an uncomfortable challenge for both United States allies.

The immediate trigger for the flare-ups was mass protests in Hong Kong, which the authorities in the semi-autonomous Chinese territory are struggling to contain. Protesters there have assailed what they say is the steady erosion in Hong Kong's rule of law, aided and abetted by the city's pro-Beijing leaders.

Students, academics and officials in Australia and New Zealand, two of the modern world's older democracies, now find their natural sympathy for the Hong Kong protesters colliding with their nations' economic dependency on Beijing - a weakness the Chinese Communist Party isn't hesitating to exploit.

The most visible flash point is on campus. Anti- and pro-Chinese Communist Party students have spent recent days erecting, ripping down, and re-erecting walls covered with cards and Post-it notes calling for freedom in Hong Kong at universities in Sydney, Melbourne, Brisbane and Hobart, and in New Zealand.

"Beijing's influence on campuses is responsible for widespread self-censorship by universities and academics in Australia and New Zealand," said Dr Clive Hamilton, a professor of public ethics at Charles Sturt University in Canberra and author of Silent Invasion: China's Influence In Australia.

"The events of the last couple of weeks on Australian campuses have proved to be a serious escalation of Beijing's interference."

Every pro-democracy protest is countered by Beijing's well-drilled student supporters. When some University of Sydney students proposed a protest on Friday (Aug 9), which didn't proceed, opponents shared notes on the Chinese WeChat platform about how to respond. 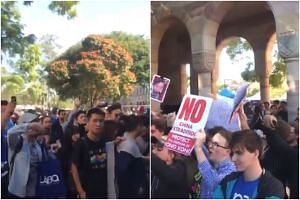 China supporters and extradition protesters clash at an Australian university

"The pro-Hong Kong independence demonstration on Aug 9 is planned by some forces of Sydney University," one person wrote, according to an image taken by a student. "We will not use force, but will absolutely not sit idly by and do nothing. (We) will fight the separatist forces to the end using legal means. Never make a concession!!"

The person, who couldn't be reached for comment, added in the message that they had "reported this to the education section" of the Chinese consulate.

After years of feeling fortunate at their economic relationship with China, Australians are starting to worry about the cost.

On Thursday, a ruling-party lawmaker, Mr Andrew Hastie, compared China's expansion to the rise of Germany before World War II, and suggested it posed a direct military threat.

"Like the French, Australia has failed to see how mobile our authoritarian neighbour has become," Mr Hastie wrote in the Sydney Morning Herald.

Mr Hastie's comments ricocheted between Beijing and Canberra, where the Chinese embassy condemned the former officer in the Special Air Service, an elite army unit.

"We urge certain Australian politicians to take off their 'coloured lens' and view China's development path in an objective and rational way," a spokesman said.

"They should make efforts to promote mutual trust between China and Australia, instead of doing the opposite."

As the smallest members of the Five Eyes intelligence-sharing alliance that includes the US, Britain and Canada, Australia and New Zealand are attractive targets for Chinese influence and espionage operations, analysts say.

Mr Paul Buchanan, a strategic analyst based in Auckland, said that New Zealand is an "ideal liberal democratic lab rat" for China to experiment with ways to use "the very freedoms and transparency of democratic systems against them".

Chinese diplomats in both Australia and New Zealand appear to be encouraging confrontations by praising counter-protesters.

On July 29, a student at New Zealand's Auckland University was confronted by a group of men who objected to her involvement in adorning a protest site, known as a "Lennon Wall", with messages of support for Hong Kong demonstrators.

Cellphone footage uploaded to social media showed one of the men moving aggressively towards the student, who fell to the ground.

Three days later, the Chinese consulate in Auckland published a statement that appeared to support the actions of the alleged assailant and his companions, conveying its "appreciation to the students for their spontaneous patriotism", while condemning unnamed individuals for "inciting anti-China sentiment".

Protests and counter-protests have taken place since; participants say they have received threatening messages from unknown senders.

Defenders of free speech say the episodes are a wake-up call. New Zealand leader Jacinda Ardern said this week that officials had reminded their Chinese counterparts that New Zealand "will uphold and maintain our freedom of expression".

Standing up for such values comes at the cost of worsening relations with Beijing, the top trade partner of both countries and a lucrative source of funds for universities, which don't have the big endowments of American colleges.

The University of Queensland, where punches were thrown at a Hong Kong sympathy protest two weeks ago, is so close to Chinese authorities that it appointed the Chinese consul general in Brisbane a visiting professor of language and culture last month.

The consulate then praised the "patriotic behaviour" of 300 pro-Beijing students after the violent incident, prompting Australia's defence minister to warn foreign diplomats against interfering in free speech.

The university has said that it is committed to freedom of expression on campus.

Among themselves, mainland Chinese students share advice on how attract sympathetic coverage in confrontations with the left-wing activists they call the "baizuo", a pejorative term for Western liberals that translates as "white left".

"UQ students please be calm, don't resort to violence," said a recent post on Weibo, China's Twitter-like service. "Try to learn from the tricks of those pro-Hong Kong independence activists. If you push me I will fall over. Fake tumble, cry and wail, call campus police. We are too strong, which won't work in the world of baizuo."

"It's very tense," said Mr Drew Pavlou, one of the student organisers of the University of Queensland protest, in an interview.

"It doesn't feel safe. I have had to have security walk me to some classes."

In New Zealand, an event commemorating China's 1989 suppression of pro-democracy protests at Tiananmen Square scheduled for June 3 was moved away from Auckland University of Technology following pressure from Chinese officials.

E-mails obtained through freedom-of-information requests by online outlet Newsroom revealed that China's vice consul met with the university's president on May 31 to ask for the event not to go ahead.

The university received e-mails from the consulate on the matter, too.

University spokeswoman Alison Sykora denied the event, which was held in a different location off-campus, was abandoned because of diplomatic pressure.

In Australia, officials are so concerned about Chinese influence that the Attorney-General has asked his department to examine why 14 Confucius Institutes - Chinese-funded education units within Australian universities - haven't been registered as agents of foreign influence under a new law directed at Chinese espionage, influence and propaganda.

At the University of Canterbury in Christchurch, New Zealand, a Confucius Institute shares a building with the office of Professor Anne-Marie Brady, who has researched Chinese government influence.

Prof Brady has complained of break-ins to her home, threats, and attempted sabotage on her car. Police investigated but were unable to identify a culprit.

Mr John Howard, Australia's prime minister from 1996 to 2007, reflected the growing unease that Australia's economic future is dependent on an unpredictable adversary when he said this week that unrest in Hong Kong "perhaps represents a glimpse of the future for Chinese society".

"If you've been born into relative affluence and comfort, you take that for granted and you resent being told how to run your life," he said.

"Perhaps over the next 50 years, we're going to see just how all of that works out."