MELBOURNE - An Australian man with a history of mental health issues drove a car into Christmas shoppers in Melbourne on Thursday (Dec 21), injuring 19 people, but police said they did not believe the attack was terror-related.

The incident took place at a busy intersection on Flinders and Elizabeth streets – an area popular with tourists – in the Central Business District of Australia’s second-biggest city, media reports said.

Agence France-Presse news agency cited witnesses as saying that people were thrown into the air after being hit by the car, which did not appear to be trying to stop as it “mowed everybody down” .

Police said on Thursday that they detained the 32-year-old driver, an Australian of Afghan descent with a history of assault, drug use and mental health issues.

“At this time, we don’t have any evidence or intelligence to indicate a connection with terrorism,” the acting chief commissioner of Victoria State, Shane Patton, was quoted as saying by Reuters. He said the car was driven “intentionally” through the intersection.

Four of the injured were in critical condition, including a boy of pre-school age who had a head injury.

Police also detained a 24-year-old man at the scene who was filming the incident and had a bag with knives. Patton said it was “quite probable” the 24-year-old was not involved. The men had not been charged and their names have not been released by police.

Investigators were waiting to interview the driver, who was in hospital under police guard. 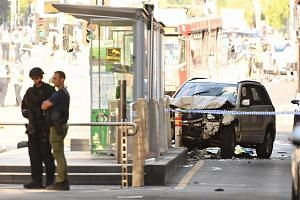 Jim Stoupas, owner of a doughnut shop at the scene of the incident, told Reuters the vehicle – believed to be a white Suzuki SUV – was travelling up to 100kmh when it drove into the intersection packed with people, hitting one person after another.

The incident followed another in January, in which four people were killed and more than 20 injured when a man drove into pedestrians just a few hundred metres away from Thursday's attack. That too was not a terror attack.

Melbourne has already installed about 140 concrete bollards in the city centre to stop vehicle attacks by militants similar to recent attacks in Europe and the United States.

Sad day in my beauty #Melbourne. #Australia. Crazy driver crashed his car against several people. We were so close, horrible scare! pic.twitter.com/IZfStAOETd

“Our thoughts and prayers are with the victims and the emergency and health workers who are treating them,” Prime Minister Malcolm Turnbull said on Twitter.

“What has occurred on Flinders Street was an act of evil and act of cowardice at a time of year when people should be out celebrating and doing their Christmas shopping,” he was quoted as saying by the Sydney Morning Herald. He offered praise for an off-duty police officer who helped detain the driver as well as the emergency services and police who, he said, arrived on the scene within seconds. The off-duty policeman was later taken to hospital.

“(The off-duty officer) deserves special praise for the way in which he instinctively came to the rescue of others, avoiding so much further carnage,” Andrews said.

Australia has been on a “high” national threat level since 2015, citing the likelihood of attacks by Australians radicalised in Iraq and Syria. Two hostages were killed in a siege by a “lone wolf” gunman, inspired by Islamic State in Iraq and Syria militants, in a cafe in Sydney in December 2014.