New South Wales firefighters said they finally had the upper hand in the fight against the vast Gospers Mountain fire on Sydney's north-western outskirts, which has been burning out of control for almost three months.

The fire seared an area of national park three times the size of Greater London and lit connected blazes totalling over 800,000 hectares - an area larger than Austria.

As residents and the authorities continued to come to grips with the sheer scale of the devastation, the Bureau of Meteorology yesterday forecast some fire grounds could get up to 50mm of rain in the coming week, offering much-needed relief after a prolonged drought.

New South Wales has been the worst-hit state in Australia in the ongoing fire crisis, having experienced temperatures of more than 40 deg C and erratic winds.

"If this BOM (Bureau of Meteorology) rainfall forecast comes to fruition, then this will be all of our Christmas, birthday, engagement, anniversary, wedding and graduation presents rolled into one. Fingers crossed," the New South Wales Rural Fire Service said on Twitter.

Meanwhile public support for Prime Minister Scott Morrison has slumped to its lowest levels amid widespread anger over his government's handling of the bush fire crisis, a survey released by Newspoll yesterday shows.

At least 28 people have been killed in the fires that have so far destroyed 2,000 homes and razed 11.2 million hectares, nearly half the area of the United Kingdom.

Mr Morrison has come under attack for being slow to respond to the crisis, even going on a family holiday to Hawaii amid the fires. He acknowledged during a television interview on Sunday that he had made some mistakes.

"We have heard the message loud and clear from the Australian people," Treasurer Josh Frydenberg said yesterday, when asked about the poll result as he announced a A$50 million (S$46 million) wildlife protection fund. 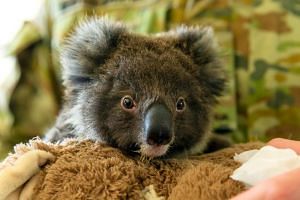 "They want to see a federal government adopt a very direct response to these natural and national disasters," he added.

The Newspoll survey shows Mr Morrison's approval rating has fallen 8 per cent since the last poll on Dec 8 to stand at 37 per cent, scoring lower than opposition Labor leader Anthony Albanese.

It is Mr Morrison's worst showing in the survey since he took over leadership of the ruling Liberal Party in August 2018, when a backbench uprising ousted then Prime Minister Malcolm Turnbull.

The poll was taken after Mr Morrison announced a A$2 billion bush fire recovery fund and mobilised 3,000 army reservists to back up state emergency workers - responses viewed as belated.

Mr Morrison also said on Sunday that he would take a proposal to Cabinet to hold a Royal Commission inquiry into the bush fires, including examining the response to the crisis, the role and powers of the federal government and the impact of climate change.

Besides protecting wildlife, Mr Frydenberg's A$50 million fund will also go towards restoring damaged habitat, with a focus on threatened species like koalas.