SYDNEY (AFP) - Australia's hard-right One Nation party has been accused of seeking donations from US gun lobby group the National Rifle Association (NRA) ahead of a general election, according to an Al Jazeera investigation.

An Al Jazeera investigator posed as a gun lobbyist to facilitate the meeting between Hanson's chief of staff, James Ashby, the party leader in Queensland, and the NRA in Washington - meetings which were then recorded.

Ashby was recorded saying that he wanted political support, powerful NRA software - to aid voter targeting - and help with donations.

"If the NRA want to rally their supporters within Australia, that's one start," Ashby said in one meeting ahead of the sit-down with the NRA.

"Two, I'd love to get my hands on their software. And three, if they can help us with donations, super."

Ashby is heard saying that a 10-million-dollar donation would allow One Nation to win eight seats in the Senate, Parliament's upper house, giving the party sufficient power to influence legislation.

However, following the Christchurch massacre any move to roll back Australia’s strict gun control legislation would likely encounter widespread opposition. 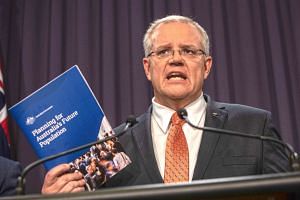 One Nation has two seats in the outgoing Senate, one of them held by party founder Pauline Hanson.

NRA official Lars Dalseide later offered the group advice on how to respond to mass shootings in a way that would avoid tighter gun restrictions.

The Al Jazeera report prompted calls for a probe into whether One Nation officials had violated rules against foreign interference in Australia's election.

Prime Minister Scott Morrison tweeted on Tuesday that the report about senior One Nation officials courting "foreign political donations from the US gun lobby to influence our elections & undermine our gun laws that keep us safe are deeply concerning".

However, he refused to tell his supporters not to back the party in Australia’s ranked voting system.

Morrison’s Liberal party are struggling in the polls and are keen not to alienate One Nation voters or their own supporters on the right. The Liberals may yet need to rely on second-preference votes to win marginal seats.

“There are many reasons not to vote for One Nation. It’s a long list. We’ve seen some of those on display in recent times. Today we saw further evidence of that,” he said.  But the prime minister added: “There are plenty of extreme views out there,” singling out the country’s Green party.

Another video purported to show the Australians meeting with representatives of Koch Industries, a company run by conservative power-broker and activist mega-donor Charles Koch.

In a statement to Australian media, Ashby attacked Al Jazeera, accusing it of being a propaganda arm of the Qatari government.

He indicated the party had reported Al Jazeera to the police to investigate whether the media group was working as an unregistered foreign agent.