BUDGONG, AUSTRALIA (AFP) - Seventy-nine-year-old Ken Stewart was determined to save his home from a bush fire in a pristine eastern Australian forest - until "hell" bore down sounding like a fleet of freight trains.

Like many thousands of Australians during the nation's unprecedented fire crisis, Mr Stewart was faced with the agonising choice of fleeing oncoming blazes or risking his life trying to protect his house.

The fires have killed 28 people and destroyed more than 2,000 homes as they have scorched an area roughly the size of Portugal over the past five months.

But having lived for 25 years in his solar-powered home among the gum trees of the forests around Budgong, a few hours south of Sydney, Mr Stewart decided to take his chances.

He turned on a sprinkler system connected to his water tanks, set up a hose aimed at the roof of his house and waited for the blazes to arrive.

Even at that moment, Mr Stewart decided to fight on. But then a "wall of fire" followed the noise, and it was suddenly 100 metres away.

"It wasn't red or orange, it was white. White hot. And it was coming towards me with a 60, 70km (per hour) wind behind it," Mr Stewart said.

Finally, Mr Stewart decided to flee and try to join his wife, who had left their home well ahead of the blaze. He got in his car, but the flames were already ahead of him and trees were burning on both sides of the driveway.

Driving into the tunnel of flames, Stewart saw a tree reaching over the driveway, hanging above the ground across a half-torn power line.

"I just ducked, shut my eyes and drove," Mr Stewart said. "I just got under it." He emerged from the tunnel to reach the main road, and drove to safety at a coastal town. 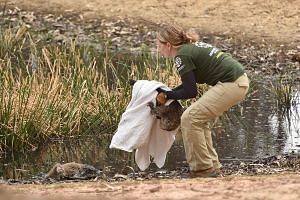 Race to save animals on Australia's fire-ravaged 'Galapagos'

However, relief at reuniting with his wife was short-lived, when he returned to his property to see the fire had destroyed his home.

Mr Stewart - wiry and strong despite nearing 80 years of age - described being trapped among the flames as like being in the abyss of eternal punishment.

"You know how we depict hell as all fire and all the rest of it," he said, recounting his ordeal while standing among the ashes of his home.

"Well I estimate that I've been to hell. So when I fall off the perch, I won't be going to hell because they've rejected me and said: 'You're not wanted here, you're not suitable, buzz off.'"

About 10km down the road, another home defender had a harrowing account of the fires that tore through Budgong in the first week of January.

Mr Nicholas Carlile, an ornithologist, sent his family to safety and armed himself with a spray backpack that he planned to continually fill with water from a small tank.

In the few days leading up to the fire's arrival, Mr Carlile felt a sense of doom that his home and the birds in the trees he loved would soon be incinerated.

"So I got up early just so I could still enjoy it. I thought that was going to be the end," Mr Carlile said, his voice cracking as he stood among charred trees.

But unlike the wall of flames that attacked Mr Stewart, Mr Carlile encountered a "creeping" fire that just stalked the outskirts of his property.

"Every time it started arcing up in here, I'd go in there with my pressure pack and say: 'You're not having this bloody tree', and I'd put the bastard out," he said.

"It was ridiculous. It was tree by tree and I was here by myself. I hadn't seen anyone for two days."

Mr Carlile's battle had the opposite outcome to Mr Stewart's, with his home surviving.

"As it turned out, the blue gums are flowering at the moment, and we've got heaps of birds. So we're so blessed, you know, very lucky."