Australian Treasurer Josh Frydenberg, who is Jewish, on Thursday (Nov 15) dismissed Dr Mahathir's warning that moving the Australian embassy from Tel Aviv would heighten the risk of terrorism.

He said Australia would make its own decisions based on national interest.

"The Malaysian Prime Minister Dr Mahathir has form," Mr Frydenberg told reporters in Melbourne. "He has called Jews hook-nosed people. He has questioned the number of people that have been killed in the Holocaust. He banned Schindler's List as a movie being shown, even though it showed the amazing story of a righteous Gentile who saved many people from persecution."

Australia's proposal to follow the US in moving its embassy to Jerusalem has sparked concern throughout the Muslim world.

A planned free trade agreement with Indonesia, the world's most populous Muslim nation, is now on hold until a final decision is made, the Australian Financial Review reported this week. 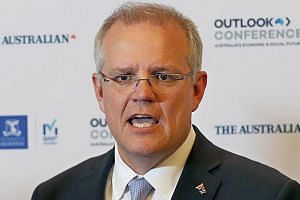 Aussie PM under fire for pitch to move embassy in Israel

Indonesia concerned over Australia shift in Israel policy, but trade deal not derailed

The treasurer had been "filling in the history" on Dr Mahathir's "record on various issues over time", Mr Morrison said.

"Australia decides foreign policy," he added. "I am not going to have our policy dictated by those outside the country."