CANBERRA (BLOOMBERG) - Australian Prime Minister Malcolm Turnbull says he can "absolutely" continue working with his deputy after the pair met in a bid to avoid fracturing the coalition government amid the fallout from Barnaby Joyce's extramarital affair with a former staffer.

"It's always very important to meet, to work through the various challenges and issues that we face, but the important thing is Barnaby and I are working closely together as we always have," Turnbull told reporters in Melbourne Sunday (Feb 18).

The nation's two most senior lawmakers talked for more than an hour in Sydney on Saturday and agreed they need to work better together in the future.

Turnbull said he and Joyce, who is the deputy prime minister and leader of the Nationals party, had a "frank and warm, friendly, good, constructive meeting."

"There are no issues between the Liberal and National parties at all," Turnbull said, characterising the relationship between the two factions as "the most enduring political alliance in Australian history and it will continue."

Turnbull lambasted Joyce on Thursday over an affair that ended his 24-year marriage and accused him of making a "shocking error of judgment."

Joyce, 50, who leads the junior party in the coalition, hit back Friday saying the criticism was "inept" and "unnecessary." 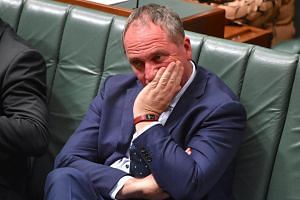 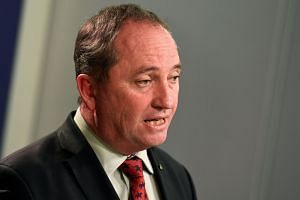 Turnbull said Sunday he didn't apologise to Joyce because "there's nothing to apologise for."

Turnbull's predecessor, former Prime Minister Tony Abbott, said Saturday that if politicians wanted to give each other advice, they should do so by knocking on their door and picking up the phone to talk directly.

"As a general rule one party doesn't give another party public advice," the ABC quoted Abbott as saying.

The war of words between the pair risks undermining the Liberal-National coalition, which already trails in opinion polls ahead of elections due by next year.

While Turnbull's Liberals are the dominant force in the partnership, the party relies on support from Joyce's rural-based Nationals to govern.

The saga has played out on the front pages of Australia's newspapers for days, with Joyce confirming that his now partner Vikki Campion is pregnant with his child.

The revelations have damaged father-of-four Joyce's credibility as a family man and he's also facing claims he allowed Campion to work in his and another ministerial office during the affair - potentially breaching the ministerial code of conduct.

In a break with tradition, Turnbull on Thursday told parliament that Joyce wouldn't serve as acting prime minister when he visits Washington this week for talks with President Donald Trump and would instead be taking leave to consider his position.

He later heaped criticism on Joyce, saying the affair had caused "terrible hurt and humiliation" to his family and new partner. The prime minister also announced an overhaul of the ministerial code and barred senior lawmakers from sexual relations with their staff.

Joyce returned fire on Friday, saying the comments had "caused further harm" and signalled he'd resist any attempts to force his resignation as Nationals leader. Only a vote of his own lawmakers could oust Joyce and none of them have publicly asked for his resignation.

Veterans Affairs Minister Michael McCormack - considered the most likely National lawmaker to replace Joyce - did not rule out a leadership challenge on Saturday but said he didn't want to get "too far ahead of myself," the Sun-Herald reported.

Any challenge to Joyce would most likely happen at a party room meeting when parliament returns in just over a week.

"There is nothing that we dislike more than implied intervention into the party processes of the National Party," Joyce said Friday.

"We are an independent unit and make our own decisions." Bill Shorten, the main opposition Labor Party leader, said the public squabbling showed the government was in disarray and challenged Turnbull to fire his deputy.

The deputy prime minister position is traditionally given to the Nationals leader under long-standing arrangements between the parties.

The spat risks returning Australia to political turmoil that voters had hoped was behind them. The nation has churned through six prime ministers since 2007 amid infighting in both the Liberals and Labor.