SYDNEY - Australian Prime Minister Scott Morrison is on a historic trip to the Pacific nations of Vanuatu and Fiji to try to bolster ties amid concerns about China's growing influence in the region.

Despite facing a looming general election, Mr Morrison on Wednesday (Jan 16) flew to Vanuatu, the first bilateral visit by an Australian leader.

After meeting with his counterpart Charlot Salwai, Mr Morrison said Australia would provide support in the areas of disaster and cyclone relief, telecommunications, energy, transport and water.

Significantly, Australia would move to allow importation of kava, a mildly intoxicating drink made from kava shrub that is a major export for Vanuatu and is popular among Pacific islanders in Australia.

Mr Morrison said Australia and Vanuatu had pledged to deepen their defence and police ties, and are working on a bilateral security treaty that covers issues including drug trafficking and illegal fishing.

"We will work together to support a Pacific region that is secure strategically, stable economically and sovereign politically," he added.

Mr Morrison's trip follows media reports last year that China was planning to build a military base in Vanuatu. The claim was staunchly denied by China and Vanuatu. But it added to growing concerns about Australia's failure to focus on relations with surrounding countries in the South Pacific. 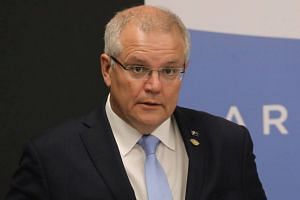 Vanuatu is heavily indebted to China, which reportedly accounts for about 40 per cent of Vanuatu's public debt. This has raised concerns that Beijing could effectively end up controlling assets or holding sway over Vanuatu if it cannot repay loans.

Interestingly, Mr Morrison is accompanied on his trip by Mr Nick Warner, who heads the Office of National Intelligence, which coordinates the intelligence community and reports directly to the prime minister.

Mr Morrison insisted on Wednesday that his trip was not designed to ward off China as a partner of choice.

"We're here because we are for the independent sovereignty and prosperity of Vanuatu, because they are our Pacific neighbours and family. That is why we're here," he told reporters.

Though some analysts have suggested that fears of Chinese influence in the Pacific have been overhyped, the concerns - which have received much media coverage - have clearly led to a renewed focus in Canberra on the region.

Late last year, Mr Morrison declared a "step up" in relations with the Pacific, including a A$3 billion (S$2.9 billion) package to boost military engagement and to establish a bank to help fund local transport, water and other projects. This included plans to set up diplomatic postings in tiny Pacific nations such as Palau and Niue.

China's ties have spread across the region, including a growing loans programme. According to analysis by the Lowy Institute, China committed about US$1.8 billion (S$2.4 million) in aid to South Pacific islands between 2006 and 2016, though this is much less than Australia's provision of US$7.7 billion.

Typically, Australian foreign ministers - rather than prime ministers - make visits to foster ties with Pacific nations. Yet Mr Morrison has opted to make a three-day trip, even though he is behind in the opinion polls ahead of an election in May and badly needs to focus on his domestic standing.

An expert on the Pacific, Dr Stewart Firth from the Australian National University, on Wednesday described the trip as an attempt to play "catch-up". "We've become aware suddenly of China's rise in the Pacific which has been happening for many years," he told ABC News.

As part of his three-day trip, Mr Morrison will also travel to Fiji, also the first bilateral trip by an Australian prime minister.

The visit is expected to include discussion about Neil Prakash, who was born in Australia and fought for the Islamic State in Iraq and Syria.

Canberra stripped him of his Australian citizenship on the basis that he was also a Fijian citizen because of his father. But Fiji was never consulted and has since denied that Prakash, who is in prison in Turkey, is Fijian.

The issue has renewed a perennial criticism that Australia adopts a paternalistic approach to its smaller Pacific neighbours.

Mr Morrison will be hoping that he will not only clear up the status of Prakash, but also demonstrate a capacity to show respect for Australia's Pacific partners.