SYDNEY (BLOOMBERG, AP) - Australia has signaled its commitment to stop exporting recyclable waste amid a pushback by regional neighbours including Indonesia and Malaysia.

State and federal governments agreed at a conference on Friday (Aug 9) to draw up a timeline for developing their own recycling capabilities.

Federal, state and territory leaders also agreed to task their environment ministers with setting a timetable to end the cross-border disposal of waste plastic, paper, glass and tires.

Australian leaders agreed the strategy must seek to reduce waste, especially plastics, decrease the amount of waste going to landfill and maximise the capability of Australia's waste management and recycling sector to collect, recycle, reuse, convert and recover waste.

Prime Minister Scott Morrison said waste management was an "issue of great concern right across the community" and "dear to the hearts" of his state colleagues.

He said only 12 per cent of waste that Australians place in recycling bins was recycled.

"There will be no exports of plastics and paper and glass to other countries where it runs the risk of ending up floating around in our oceans whether off the Great Barrier Reef – which we know there’s strong evidence of that – or anywhere else," Mr Morrison said.

Mr Morrison said he wanted the export ban implemented as soon as practicable and did not expect the change to take years.

Australia spends A$2.8 billion (S$2.63 billion) a year exporting 4.5 million metric tons of recyclable waste, 80 per cent of which is shipped to Asian ports.

Waste disposal has become an increasingly pressing problem since 2017 when China barred imports of almost all foreign plastic waste. 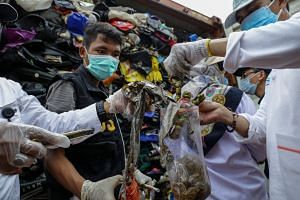 Indonesia to send 210 tonnes of waste back to Australia

Rubbish piles up in Australia as China bans waste imports

Waste not: Stepping beyond the trashhold

This has resulted in majority of the wastes ending up in Southeast Asian countries.

China and the Philippines have recently cracked down on waste imports from countries including Australia.

Indonesia last month said it had found toxic or contaminated materials in containers from Australia, the US, Germany and Hong Kong, and announced it would ramp up inspections.

That's resulted in waste containers mounting up in ports, disrupting customs clearance under strain from the world's influx of trash.