SYDNEY (REUTERS) - The worst drought in living memory is sweeping parts of eastern Australia, leaving farmers struggling to cope and asking questions about their future.

Record-low rainfall in some regions and successive seasons of above-average temperatures have blighted vast tracts of Australia's grazing and crop land.

While droughts are common in Australia, climate scientists say climate change is expected to cause longer and more intense droughts as well as greater extremes of temperature.

While the weather has improved in parts of Western Australia, winter rain has gone missing across much of the country's east, leaving farmers praying for rain after planting seed in dry soil or culling cattle and sheep they can no longer afford to feed.

New South Wales, which just recorded its fifth-driest July on record, has been hardest hit. About 99 per cent of the state - which accounts for a quarter of Australia's agricultural output by value - is now officially in drought.

Prime Minister Malcolm Turnbull announced the funding which will give farmers in need lump sum payments and support mental health initiatives and community groups. "These are very exceptional circumstances and it's important that we react and respond with the support that farmers need," Turnbull told reporters. "It is a shocking drought," Turnbull said at a farm in Trangie, west of the city of Dubbo in NSW.

"It appears that we are going into a dry spring and a tough summer.

"We hope the forecasts are proved wrong, but the prospects are not great at the moment," Australian Broadcasting Corp online reported Turnbull as saying.

The announcement will provide households up to A$12,000 in additional lump-sum payments for couples. Single households will get $7,200.

The first payment will be made on the first day of next month. The second payment would be made on March 1, next year, ABC said.

The National Farmers' Federation welcomed the news. "It's vital that we help farmers and families that are dealing with the stress and pressures drought brings," president Fiona Simson said in a statement.

The announcement brings the government's total drought relief package to A$576 million. The state government of New South Wales has also provided more than A$1 billion in assistance for farmers.

With grazing pastures turned to dust and feed costly and scarce, the drought is having a major impact on livestock.

Farmers have been shipping in hay from growers in the country's west or the far north to feed their livestock. Even those sources are now being depleted, however, and as grain silos in the south are emptied, desperate owners are being forced to slaughter animals, even if it means it will take years for herds to recover.

The cull will ultimately leave the size of Australia's national herd at a record low, ushering in a prolonged period of livestock rebuilding and higher prices for the industry.

Last year, drought cut Australia's output to the lowest level in a decade. This season has got off to an even worse start, with farmers planting in some of the driest soil in years. 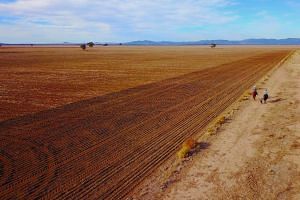 Australia's official forecaster has trimmed its estimate of this year's wheat crop to 21.9 million tonnes, but warned yields would fall further without rain. Some private forecasters say the crop could be as low as 13 million tonnes, which would be the lowest since the drought-stricken 2008 harvest.

The current dry period is not as extensive as the Millennium drought of 1997-2005, which devastated nearly 50 per cent of the country's agricultural land and was associated with two El Nino systems, which bring hot, dry weather to Australia.

But analysts and industry experts worry about how badly conditions have already deteriorated, especially since El Nino weather may be just around the corner.

"Drought is a little bit like cancer," says Margo Wollaston, who lives with her cattle farmer husband, Tom, 70, outside Tamworth in northwest NSW.