VERONA (WASHINGTON POST) - Cardinal George Pell has been found guilty in Australia on charges related to sexual abuse, according to two people familiar with the case and other media reports, becoming the highest-ranking Vatican official to face such a conviction.

The conviction provides one of the clearest examples to date of how the sexual abuse scandal has eroded the church's credibility while ensnaring figures in the upper echelons of power.

Pell, who has categorically declared his innocence, had taken a leave of absence from the Vatican's third-most powerful position, as the economy minister, to fight the charges.

The Vatican on Wednesday (Dec 12) did not address the explosive case, but it did announce that in October Pope Francis had removed Pell from his advisory group known as the Council of Cardinals, along with a Chilean cardinal, Francisco Javier Errázuriz Ossa, who is accused of covering up for abusive priests.

(A third cleric - Congolese Cardinal Laurent Monsengwo Pasinya - was also removed from the council, but has no known connections to abuse and recently retired from his position as the archbishop of Kinshasa.)

Vatican spokesman Greg Burke said Pope Francis was "thanking them for the work they have done over these past five years". 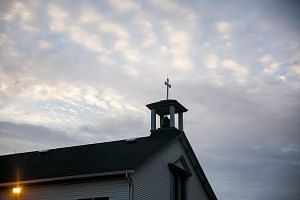 One Australian courtroom source said Pell's sentencing proceedings would begin in February and that he will be tried next year on additional charges.

This is the second church-related case from Australia to make headlines in recent days. Last week, an Australian appeals court cleared Mr Philip Wilson, the former archbishop of Adelaide, on charges that he helped conceal the sexual abuse of two altar boys by a priest.

The Pell conviction was first reported by the Daily Beast, which said that the charges stemmed from the abuse of two choirboys in the 1990s. His case in Melbourne has unfolded in secrecy because of a court-issued gag order.

That order has led to a blackout in Australia about the news of a figure who was once among the country's most highly regarded Catholic leaders, the son of a gold miner who rose to become the archbishop in both Melbourne and Sydney.

Major Australian outlets on Wednesday did not carry headlines about the case, but some wrote cryptic stories explaining that significant news had unfolded but was unreportable.

"A very high-profile figure was convicted on Tuesday of a serious crime, but we are unable to report their identity due to a suppression order," Melbourne's paper, the Age, wrote. The newspaper said that the person "was convicted on the second attempt, after the jury in an earlier trial was unable to reach a verdict".

A judge in the County Court of Victoria had called earlier this year for the gag order as a way "to prevent a real and substantial risk of prejudice to the proper administration of justice." Calls and messages to Pell's lawyers were not returned.

Pell had risen to become one of the most powerful officials at the Vatican, and he was placed several years ago on Pope Francis' advisory council, which was meant to help Pope Francis reform the Vatican bureaucracy.

When the authorities in Australia last year announced that Pell faced "historical sexual assault offences", Pell said the accusations were false. "The whole idea of sexual abuse is abhorrent to me," Pell said.

A Vatican spokesman on Wednesday declined to address Pell's case, saying that the Holy See "has the utmost respect for Australian judicial authorities". "We are aware there is a suppression order in place by the court, and we respect that order," the spokesman said.

Mr Peter Saunders, a founding member of Ending Clergy Abuse, said that the secrecy surrounding the case reminded him of the church's own approach in dealing with alleged abusers behind closed doors. "Justice not only must be done but also (must) be seen," Mr Saunders said.

For Pope Francis, Pell's conviction is just the latest in a series of major abuse-related developments that have amounted to the greatest challenge of his papacy. In several countries, and in more than a dozen states across the US, outside authorities are pursuing crimes within the church with unprecedented vigour.

Pope Francis himself has been accused by a former Vatican ambassador of knowing about - and failing to swiftly respond to - the sexual misconduct of Theodore McCarrick, who earlier this year resigned from the College of Cardinals.

The Vatican is preparing for a landmark summit in February in which leading bishops from across the world will meet in Rome to discuss sexual abuse and the protection of minors.