SYDNEY (AFP) - An Australian archbishop sentenced to a year in jail for covering up child sex abuse announced on Wednesday (July 4) that he would appeal against his conviction and ignore calls he resign from his position.

Philip Wilson, the 67-year-old archbishop of Adelaide, was convicted in May of not disclosing to police abuse by another priest, James Fletcher, after being told about it in 1976 by two victims, one of them an altar boy who told him inside the confessional.

One of the highest-ranked church officials convicted of covering up child sex abuse, Wilson was sentenced on Tuesday to 12 months' imprisonment, though the court ordered he be assessed for home detention, with a decision due next month.

Wilson issued a statement on Wednesday saying he would appeal against his conviction and retain his position in the Roman Catholic Church.

"I am conscious of calls for me to resign and have taken them very seriously. However, at this time, I am entitled to exercise my legal rights and to follow the due process of law," he said.

"Since that process is not yet complete, I do not intend to resign at this time. However, if I am unsuccessful in my appeal, I will immediately offer my resignation to the Holy See."

Wilson stepped aside from his church duties following his conviction in May. 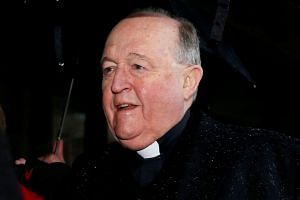 In sentencing Wilson on Tuesday, Newcastle Local Court magistrate Robert Stone noted that the church official had shown "no remorse or contrition" and argued that the 12-month sentence "should not be suspended".

"It does not support the terms of general deterrence," he added. "On that basis, the only available remaining option is full-time imprisonment or home detention."

He justified the home detention option due to Wilson's age, prior good record and that he was unlikely to reoffend.

There was no dispute during the trial that Fletcher, who is now dead, sexually abused an altar boy.

The hearing instead focused on whether Wilson, then a junior priest, was told about it.

Wilson served as a priest in New South Wales before Pope John Paul II appointed him Bishop of Wollongong in 1996. Five years later, he became the Archbishop of Adelaide.