SYDNEY (BLOOMBERG) - Australian lawmakers on Thursday (June 28) overwhelmingly passed bills to crack down on foreign interference, with Prime Minister Malcolm Turnbull saying they’re needed to stop reported meddling by China and other nations in the nation’s government, media and universities.

The legislation toughens penalties for espionage and requires people or organisations acting in the interest of overseas powers to register and disclose their ties.
It was passed with 39 votes in favour, with 12 against.

A similar Bill was introduced in the US Congress that would mandate a report on Chinese attempts to influence American politics, and other Western nations may soon follow with their own regulatory measures.

The laws risk exacerbating diplomatic tensions between China and Australia, which have soured this year after Mr Turnbull cited reports that organisations affiliated with Beijing had attempted to influence national affairs as a catalyst for the bills.

As the most China-dependent developed economy, Australia potentially has a lot to lose should relations deteriorate further: Exporters have already said the strained ties were behind delayed shipments into the ports of its biggest trading partner.

Over the past decade, China has become Australia’s top trading partner, biggest provider of foreign students and largest source of tourism revenue.

China accounted for 29 per cent of Australia’s two-way commerce in 2016, nearly double from a decade earlier, as it snatched up Australia’s iron ore and coal to feed a construction boom.

Mr Cheng Jingye, China’s ambassador to Australia, on June 19 called for an end to the “Cold War mentality” and bias and bigotry affecting the relationship.

In making the case to pass anti-foreign interference legislation, Mr Turnbull in December cited reports that an Australian lawmaker both received a payment from a Chinese-born businessman and warned him that Australia’s intelligence agencies were tapping his phones.

Mr Turnbull particularly angered China by telling reporters in broken Mandarin that the Australian people should “stand up and assert their sovereignty” – adapting a phrase attributed to Chairman Mao Zedong in the 1940s.

The Australian legislation will widen the definition of espionage offences in addition to imposing stronger penalties and disclosure requirements. 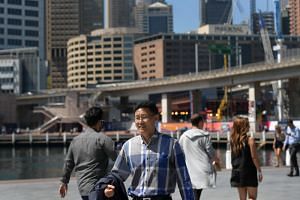 The two bills were agreed upon after a parliamentary committee amended them to include protections for charities and religious groups.

The legislation has been closely followed in the US, which shares Australia’s concerns about China’s militarisation of the South China Sea and investment in sensitive industries.

China is making a coordinated effort to influence US affairs through surveillance, New Jersey Republican Chris Smith said in an interview from Washington on Monday.

“It’s an all-out effort,” by China, he said. “It’s happening all over Europe, all over Latin America and all over Africa. It’s happening in Australia as well, without a doubt.”

Along with six co-sponsors, Mr Smith introduced a Bill into Congress earlier this month that would require the Trump administration to deliver a report to Congress within one year on Chinese attempts to influence US politics, “including efforts to corrupt United States governmental or non-governmental institutions or individuals.”

The Bill isn’t expected to receive a House vote for months, however.

Chinese officials may be uncomfortable with the Australian laws because other liberal, Western democracies could follow suit, said Dr John Blaxland, head of the Strategic and Defence Studies Centre at the Australian National University in Canberra.