BEIJING (REUTERS) - China’s aid to countries in the Pacific has no political strings attached and is not aimed at any third party, the country’s foreign ministry said on Friday (Aug 10), after a think-tank said China has become the second-largest aid donor in the South Pacific.

China’s US$1.3 billon (S$1.78 billion) -worth of donations and concessionary loans since 2011 trails Australia’s US$6.6 billion, figures compiled by Australia’s Lowy Institute show, but it is more than New Zealand’s US$1.2 billion.

Spending by China, criticised by many of its neighbours for island building in the South China Sea, is almost nine per cent of total aid donations in the South Pacific.

If pledged aid is included, China’s promises total US$5.9 billion, or nearly a third of all aid pledged to the region’s 14 countries by 62 donors.

China “provides what aid it can on the basis of respecting the wishes of the island nations without attaching any political conditions, vigorously promoting socio-economic development”, it added.

“China’s aid is aimed at promoting the well-being of the people of the island nations, and strengthening their ability to develop sustainably, without seeking any personal gain, and it is also not aimed at any third party,” the ministry said.

China “hopes the relevant side abandons ‘zero sum thinking’and unprovoked suspicion, and does more to benefit peace, stability and development for Pacific island nations”, the ministry added, without elaborating.

Australia and the United States have begun a new campaign to counter China’s rising influence in the Pacific.

Australia on Thursday promised radio gear and help to build parliament offices in Samoa’s capital of Apia, the latest pledge of aid in the Pacific Islands where China and Australia have been ramping up tit-for-tat donations.

The size of Australia's backing for the Legislative Assembly Office was not disclosed in a government announcement, nor did Foreign Minister Julie Bishop give a figure for a radio transmission facility she promised in a radio interview on Thursday (Aug 9).

Since 2011, China has spent US$1.3 billion (S$1.78 billion) on concessionary loans and gifts ranging from computer hardware in Papua New Guinea to a new prime ministerial compound in Vanuatu's capital of Port Vila.

That has stoked concern, as some of the loans fall due, that the small recipient countries are becoming increasingly beholden to Beijing financially, adding to strains in Sino-Australia ties and worrying the World Bank.

Visiting for a meeting of regional foreign ministers and to announce the aid, she added that Australia welcomed China's donations to the region, although she has previously criticised the scale of its lending. 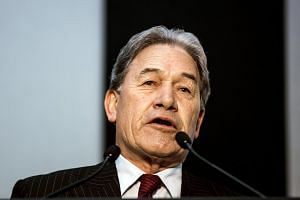 "There is definitely an element of briefcase diplomacy in the Pacific," the Lowy Institute's Pacific Islands programme director, Jonathan Pryke, told Reuters by telephone from Samoa.

The Lowy numbers,  which do not include New Zealand contributions since March 2017,  also show China jostling with Taiwan to use aid to cultivate diplomatic ties in a region home to a third of Taiwan's allies.

Taiwan's aid has helped its allies develop without incurring financial overload, the self-ruled island's economic and cultural office in Australia told Reuters, adding that it aimed for "reciprocal and mutually beneficial relations" with allies.

Taiwan is China's most sensitive territorial issue. Beijing considers the island a wayward province of "one China".