SYDNEY (AFP) - Australia is drawing up plans to require migrants to temporarily settle in regional and rural areas to ease congestion in major cities, the government announced on Tuesday (Oct 9).

While much of the vast continent is sparsely populated, Australia is growing at an annual rate of 1.6 per cent - one of the highest among OECD countries.

Sydney, Melbourne and southeast Queensland are among the fastest-growing urban areas in the world thanks in part to overseas migration, said population minister Alan Tudge.

The resulting strain on infrastructure in Australia's eastern cities cost the economy A$15 billion (S$14.7 billion) last year, with annual forecast losses of A$40 billion by 2030 if left unchecked, Tudge told an audience at the Menzies Research Centre think-tank in Melbourne.

"We are working on measures to have more new arrivals go to the smaller states and regions and require them to be there for at least a few years." Other parts of the country "have barely grown and (are) crying out for more people", he added.

Tudge did not outline how new immigrants would be forced to remain in regional areas, saying this was still to be determined by the government. 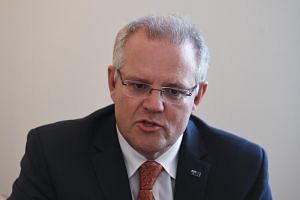 Australia's population to hit 25 million - a decade earlier than forecast

He flagged a number of other schemes to ease population pressure, including a bigger infrastructure spend and moving public servants out of the big cities.

Critics such as former Australian Border Force chief Roman Quaedvlieg said requiring migrants to live in regional areas could be difficult to enforce.

"Migrants will gravitate to opportunities and amenities in cities," he tweeted Tuesday.

"It's not possible to police the condition without substantial resources, both identifying breaches & sanctioning them."

Australia has since seen had an influx of migrants from across the world since the arrival of European settlers in the 18th century, with nearly half of Australians either born overseas or at least one parent born abroad.