SYDNEY (AFP) - Australia pledged half a billion dollars to restore and protect the Great Barrier Reef on Sunday (April 29) in what it said would be a game-changer for the embattled natural wonder.

The World Heritage-listed site, which attracts millions of tourists, is reeling from significant bouts of coral bleaching due to warming sea temperatures linked to climate change.

The reef is also under threat from the coral-eating crown-of-thorns starfish, which has proliferated due to pollution and agricultural runoff.

Mr Turnbull said it was the "largest ever single investment - to protect the reef, secure its viability and the 64,000 jobs that rely on the reef".

"We want to ensure the reef's future for the benefit of all Australians, particularly those whose livelihood depends on the reef," he added.

The reef is a critical national asset, contributing A$6.4 billion a year to the Australian economy.

Canberra has previously committed more than A$2 billion to protect the site over the next decade, but has been criticised for backing a huge coal project by Indian mining giant Adani nearby. 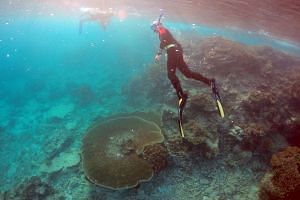 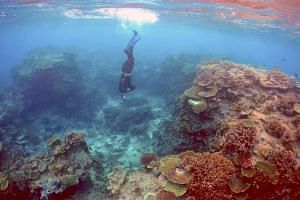 With its heavy use of coal-fired power and relatively small population, Australia is considered one of the world's worst per-capita greenhouse gas polluters.

Canberra insists it is taking strong action to address the global threat of climate change, having set an ambitious target to reduce emissions by 26 to 28 per cent from 2005 levels by 2030.

Mr Turnbull said part of the money will be used to mitigate the impacts of climate change, but gave no details.

Conservationists said while the funding was “an important step”, the biggest threat to the reef was global warming and not enough was being done to combat it by embracing clean energy.

“To simultaneously promote the world’s biggest coal mine (Adani) while pretending to care about the world’s largest reef is an acrobatic feat only a cynical politician would attempt.”

“Our elected representatives can’t have it both ways,” she said. “Climate change is the number one threat to the Great Barrier Reef and only concerted action to cut pollution will fully protect it.”

The bulk of the new funding - just over A$200 million - was earmarked to improve water quality by changing farming practices and adopting new technologies and land management.

"The money will go towards improving water quality, working with farmers to prevent sediment, nitrogen and pesticide runoff into the reef," said Environment Minister Josh Frydenberg.

"It will ensure that we tackle the crown-of-thorns...and use the best available science to ensure our coral is resilient to heat and light stress."

He said the government would work with traditional Aboriginal owners, the tourist industry, farmers and scientists, to save the reef, calling the commitment a game-changer.

Earlier this month, scientists said the site suffered a catastrophic die-off of coral during an extended heatwave in 2016, threatening a broader range of reef life than previously feared.

A study in the journal Nature said some 30 per cent of the reef's coral died, the first of an unprecedented two successive years of coral bleaching along the 2,300km reef.