SYDNEY (REUTERS) - Australia's political parties are campaigning in a general election set for May 18, with the fight focused on tax cuts, climate change and social programmes.

Below are party policies taken mainly from campaign programmes and pre-election announcements.

- Labour has promised to match the coalition's planned tax cuts for workers earning between A$48,000 and A$126,000 a year, but also pledged a bigger rebate for people earning less than A$45,000. No changes to current tax brackets.

- The ruling coalition and opposition Labor are committed to the Paris Accord that requires member states to reduce emissions by 26 per cent from 2005 levels. 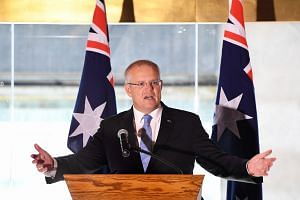 - The biggest differences centre on how much electricity must be generated by renewables. The coalition has a target of 26 per cent, while Labor proposes a minimum of 45 per cent. Labor also says half of all new cars will be electric by 2030.

- The coalition has been divided over energy policy and climate change and remains a strong backer of traditional energy sources. The tensions over energy policy were a catalyst for Mr Malcolm Turnbull's ouster as prime minister in August.

- Proposed A$725 million investment in residential care for elderly Australians.

- Promises to outspend the coalition on healthcare spending, including more than A$2 billion to expand free cancer treatment.

- Proposes to increase the minimum wage, but has not given specific details. The party also pledges to raise pay for people who work on weekends and public holidays.

- The coalition promises record spending on education over the next decade.

- The party pledges to outspend the government but has not given specific figures. It also plans to subsidise pre-school for children for two years.

The coalition and Labor have pledged to spend 2 per cent of the country's gross domestic product on defence.

- The coalition and Labor will keep the current policy of holding refugees who arrive by boat at two remote Pacific detention facilities.

- The coalition says it will reverse a law that allows doctors to recommend transfers from the Pacific centres if they are unable to get the necessary medical treatment. Labor has promised to maintain the medical transfer policy.