SYDNEY (AFP) - More than a decade after vowing to "close the gap" between indigenous Australians and the rest of the country, the government on Thursday (Feb 14) admitted it was still falling far short.

Prime Minister Scott Morrison said that only two of seven government targets to improve the wealth, health and well-being of the first Australians were being met.

Efforts to improve early education and rates of high school qualifications were on track, but targets in other areas - including boosting employment and increasing life expectancy - were falling behind.

"I want Aboriginal and Torres Strait Islander children to have the same opportunities as all other children growing up in Australia," Mr Morrison told Parliament.

"But this is not true for Aboriginal and Torres Strait Islander children in Australia today. It's never been true. And I don't know when it will be true. And that is the truth we must confront again today," he said in Parliament.

Aboriginal Australians make up about 3 per cent of the total national population of 25 million, but remain the country's most disadvantaged community.

The unemployment rate for Aboriginal Australians is three to four times higher than the national average. 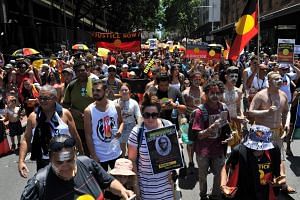 Suicide rates for Aboriginal children are five times higher than for the rest of the population according to the Australian Bureau of Statistics.

Mr Morrison said that while the "Closing the Gap" initiative will continue to take action across the broad range of issues, he would place immediate focus on education.

"It's the key to a good life. If you can't read, if you can't write, there is no possible way you can share in the prosperity of Australia."