Some experts flag educational impact, while others welcome shift towards digital literacy

A new A$225 million (S$209 million) school in Sydney has caused a stir after it opened with state-of-the-art facilities - but no library.

Instead, the Arthur Phillip High School in the Sydney district of Parramatta will have "iHubs", which will have digital resources and some hard copy books. Other books will be available via a librarian on request.

The move follows a shift away from traditional libraries and books in schools across Australia.

Last year, Siena College, a school in Melbourne, replaced its library with a so-called "learning centre" where students can hold discussions and learn about new technologies. Instead of librarians, the school has "change adopters" who host discussions with students and teach soft skills such as creative thinking, according to a report in The Age newspaper.

Separately, Fortitude Valley State Secondary College, a new secondary school in Brisbane, has dispensed with print textbooks, notebooks and libraries, and will instead be "paperless".

"We are an iPad school," says the school on its website.

"Our curriculum and pedagogy are heavily augmented through the use of an iPad within and outside the classroom."

In recent years, some schools have also moved away from hiring qualified teacher librarians and instead employed staff such as "library assistants" who do not have qualifications or training.

But this move away from physical books and traditional libraries has prompted concerns about the educational impact.

Dr Margaret Merga, an expert on literacy and education from Edith Cowan University, said libraries and librarians were crucial to encouraging young people to read more books. Shifting towards online-only books, she said, could prompt students to read less and affect literacy and comprehension levels. 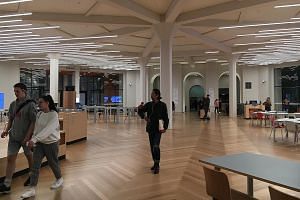 "One of the most effective ways for students to maintain their literacy skills is to keep reading," she told The Sunday Times.

"We should provide libraries that enable students to access paper books and e-books and we need qualified staff to connect students to the books."

Dr Merga said school students actually tend to prefer to read books on paper than on their screens. She said research has shown that students may want to have a sense of the length of the book or are attracted to the covers and to the ability to physically hold the book and insert bookmarks. And, she added, schools should continue to use qualified librarians, who play a vital role in connecting students to books and in encouraging reading.

"There is an idea that young people want to do everything on screens," she said. "When it comes to choosing books for pleasure, young people in primary and high school typically prefer to read in paper book form."

But other experts have welcomed the move by some schools to increase the focus of the library on digital literacy.

An article last April by four academics from RMIT University said libraries should not only seek to promote literacy and provide access to books, but also promote "broader digital literacy, information provision and developing critical evaluation of information". They said librarians could play an important role in assisting students to use new technologies such as three-dimensional printing and robotics.

"Information can be inaccessible, and misunderstood, without proper instruction, guidance and support," said the article, published on The Conversation website.

But the changes to school libraries have prompted the creation of a group called Students Need School Libraries, which is campaigning to urge states across Australia to make sure all schools have a library with qualified librarians.

The coordinator of the campaign, Ms Holly Godfree, questioned the decision of the new Sydney school to use hubs rather than a central library. The high-rise school will have hubs on different storeys to cater to particular year groups.

"I question it from an educational point of view and a practical, human point of view," Ms Godfree told The Sydney Morning Herald.

"Spreading out just splinters the collection so that it makes it harder to find things and less efficient to manage."