EUCHAREENA, AUSTRALIA (NYT) - Ms Fleur Magick Dennis has stopped showering every day, allowed her vegetable patch to die and told her four sons to let the dishes pile up. Sometimes, all her family has is bottled water, and they have to preserve every drop.

A year and a half ago, the reservoir in their town, Euchareena, went dry, leaving the family and some other residents without running water.

"I didn't think I'd be in this position, trying to fight for water for basic human needs in Australia," Ms Magick Dennis said.

As a crippling drought and mismanagement have left more than a dozen Australian towns and villages without a reliable source of water, the country is beginning to confront a question that strikes at its very identity: Is life in Australia's vast interior compatible with the age of climate change?

In the outback - a landscape central to Australian lore, far removed in distance and spirit from the coastal metropolises - rivers and lakes are disappearing, amplifying fears that wide swathes of rural territory may eventually have to be abandoned.

Euchareena and Australian towns like it are far from alone. One-quarter of humanity lives in countries that are using almost all the water they have, according to data published by the World Resources Institute in August.

Shortages have plagued places from California to Cape Town, South Africa, which narrowly escaped running out of water last year.

But Australia, the most arid inhabited continent, is unique among developed nations in its vulnerability to the effects of climate change, scientists said. With the country's driest spring on record just concluded and another hot, parched summer likely to be ahead, the challenge of keeping Australia hydrated is only becoming more urgent.

"People think about climate change as this very faraway prospect, but in fact, it's here now," said Ms Joelle Gergis, a senior lecturer in climate science at the Australian National University in Canberra and an author for the Intergovernmental Panel on Climate Change.

"We're starting to glimpse what the future is going to be like," Ms Gergis added. "It's possible that parts of Australia will become uninhabitable." 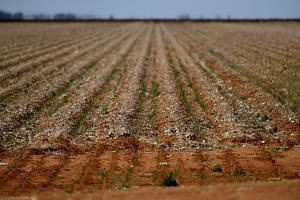 Australia's cities - which rely on expansive dams and, increasingly, plants that transform seawater into drinking water - may be able to sustain themselves even in the driest conditions, policy experts said.

However, "as soon as you go inland and you don't have the ocean, we're not going to be fine, and I don't think anyone knows what the solution is," said Mr Ian Wright, a senior lecturer in environmental science at Western Sydney University, who worked with Sydney's water utility for more than a decade.

"It is so dire right now, I'd say it's an absolute crisis," he added. "It's beyond desperate."

Farming families and indigenous communities, which in their different ways have carefully managed the land's scarce resources, may have to relocate. Australia's tourism industry, which has always heavily promoted the outback as a destination, could also suffer.

And with fire season off to a ferocious start, towns like Euchareena live in fear that they might not be able to stop any blazes that ignite.

We're a "tinderbox waiting to go up", Ms Magick Dennis, 40, said as she waited on her porch for a water truck to reach the village, a dusty strip of homes in a region of fewer than 200 residents that is a four-hour drive from Sydney. Atop a hill sits a 20,000-gallon tank, the only resource residents have to fight a fire.

Ms Magick Dennis and her children used to enjoy swimming at the village dam in the summer. Now, though, the creek bed is littered with dead reeds and mussel shells; the surrounding eucalyptus trees are exposed at the roots.

"It's beyond going, 'Oh, it's going to rain soon and it will get better,'" said Ms Magick Dennis, who has considered moving. "The ecosystem is really damaged."

In rural Australia, that damage often results from a complex interplay of mismanagement, drought and climate change.

The conservative Australian government has approved water-intensive mining projects and made contentious deals with agribusiness - agreements that are often blamed for the degradation of the country's waterways, which sustain dozens of communities and hundreds of native plant and animal species.

A lack of investment has also put the country behind nations like the United States and China in its ability to model future climate and water scenarios, said Mr Andy Pitman, director of the ARC Centre of Excellence for Climate Extremes in Sydney.

At the same time, Australia's dry and variable climate is becoming even drier and more unpredictable. Parts of the country are experiencing less rain, and the floods that usually fill rivers, lakes and dams are decreasing, scientists said.

This is happening as the country's growing population puts increasing demands on its water. "That's not a very good set of circumstances to find yourself in," Mr Pitman said.

Across New South Wales, the state where the drought that began in 2017 has hit hardest, plots of abandoned, parched land stretch for miles. The occasional green pasture is a sign of a farmer battling the elements - and probably wealthy enough to irrigate.

"If the drought went on for another four years, that would be Armageddon for Australia," said Mr James Hamilton, who farms land about 434km inland from Sydney. He, like many others, has not planted any crops this year and plans to sell off his remaining livestock.

The reservoir on Mr Hamilton's 2,428ha property is empty, and the land where knee-high wheat should be flourishing this time of year is desiccated.

Farmers are used to harsh conditions, but Mr Hamilton worries that businesses in small towns are less likely to bounce back from the drought, given the cascading economic effects. "Nothing is sustainable without water," he said.

The largest nearby town, Dubbo, which has a population of about 40,000, relies on water from the Macquarie River, which could stop flowing by May, according to the local council. The Burrendong Dam reservoir, which feeds the river, is currently at about 3 per cent of its capacity.

Already, the town - where temperatures can reach 46 deg C in the summer - has stopped watering some public spaces, and each resident is restricted to 280 litres of water per day, about 74 gallons. Residents pushed back against tighter limits that included turning off evaporate air-conditioning between midnight and 7am.

The local zoo, one of the largest in Australia, is recycling water and has replaced some garden beds with synthetic turf. The fire station is exploring alternative means to smother blazes, like sand and foam.

If the river runs dry, Dubbo would have to rely on its wells, which currently supply just a portion of its water. But in some parts of Australia, low-quality groundwater has caused problems.

In towns north of Dubbo, residents have reported foul-smelling, metallic-tasting water as well as medical problems like high blood pressure and skin conditions. Some said they had received no warning that the water might be unsafe to drink.

"At the worst, it tastes like you bit your cheek and it was bleeding," said Ms Fleur Thompson, a resident of Bourke, a town in the state's north-west.

In Australia's cities, the picture is somewhat less bleak, but even there, water supplies are running short. The reservoir at Sydney's dam is less than half full, and the city has employed "water officers" to educate citizens and enforce restrictions.

The government of Victoria has ruled out building more dams to serve rural areas and the city of Melbourne because river flow in that state is expected to drop by half by 2065.

Possible solutions include recycling water and relying on desalination plants, which are often criticised for their high energy use and the potential environmental harm of ejecting brine back into the ocean. These methods are crucial, though, if Australia is to remain livable under dire climate change scenarios, policy experts said.

"We can't let ourselves off the hook; no matter what the impact of climate change, we need to plan," said Mr Stuart White, director of the Institute for Sustainable Futures at the University of Technology in Sydney.

In early November, rain finally fell across parts of New South Wales, providing some relief and hope as people revelled in the puddles. But the drought is far from over, and the question of whether Australia will learn and adapt will linger on.