WOODEND/WELLINGTON (REUTERS) - Helicopters ferried scores of residents and tourists out of a small New Zealand town on Wednesday (Nov 16) as others boarded naval ships, three days after the region was completely cut off by landslides following a major earthquake.

Prime Minister John Key pledged to push emergency laws through Parliament if necessary to prop up businesses in Kaikoura, a seaside tourist town famed for its whale-watching and seafood delicacies some 150km north of Christchurch.

"If we are helping pay the wages and we can get some of the tourists back... then we can get through the worst of it and get you out the other side," Mr Key told business leaders in Kaikoura after flying in by helicopter.

International tourists contributed NZ$14.5 billion (S$14.55 billion) to the New Zealand economy in the year to March, the private-sector Tourism Industry Association (TIA) estimates, up 20 per cent on the previous year and overtaking the dairy industry as the country's biggest export earner.

One tourist ferried out of Kaikoura by helicopter said he planned to continue his journey, despite describing the 7.8 magnitude quake that killed two people as "very frightening". 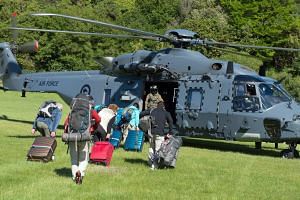 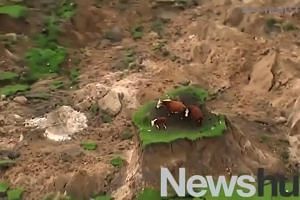 "It was rocking around like there were 10 people who were outside pushing it," Mr Chris Stewart, 62, a finance broker from Australia, said of his experience inside a camper-van.

Mr Stewart landed with other evacuees in Woodend on Wednesday, a small town north of the South Island's largest city of Christchurch, where officials processed people in a community hall.

Asked if he was concerned about staying in New Zealand, where he plans to hire another camper-van to complete his two-week holiday, Mr Stewart said: "Hell no, I've crossed it off the bucket list: lived through an earthquake."

The quake that struck just after midnight on Monday (Nov 14) rocked much of the country, waking people and stirring memories of the 6.3 magnitude Christchurch tremor that killed 182 people in 2011. A tsunami alert that followed Monday's quake sent many rushing for higher ground, before the threat was lowered.

Local TV pictures showed huge landslides covering roads and rail routes, and crevasses in highways. Large sections of rocky coast were covered in seaweed and abalone, apparently lifted out of the sea by the force of the quake.

Mr Key on Wednesday rang US President-elect Donald Trump, after missing his calls earlier in the week. Mr Key said Mr Trump expressed sympathies over the earthquake and the pair discussed the economy and trade.

Several ships were diverted from celebrations of the Royal New Zealand Navy's 75th anniversary to head to Kaikoura with supplies and emergency aid.

Mr Key told local businesses he was considering "throwing some money" at an international online campaign to promote Kaikoura once road access had been restored to reassure tourists it was safe to visit as the peak summer season approached.

The government would also put together a business package in the next few days to allow businesses to keep staff on the payroll until tourists returned, Mr Key said.

In the capital, Wellington, large buildings rocked by the quake were shut off due to earthquake damage as aftershocks continued and strong winds were expected in the coming days.

Authorities said they would have to bring down a multi-storey building near the country's Parliament due to structural damage. The Defence Force's damaged headquarters was closed to its 1,200 staff and a spokesman said he did not know when it would re-open.