The development of the Scarborough field, Pluto onshore processing facility and a 430km subsea pipeline led by Woodside Petroleum will supply as much as eight million tonnes annually for at least 20 years, with first cargoes expected from 2026.

The gas will be processed at the Pluto LNG plant at Karratha of Western Australia.

It is a project that cuts straight to a key debate in the energy transition: the role of natural gas as nations aim to both curb greenhouse gas emissions and avoid supply crunches that triggered recent power shortages in Asia and record prices in Europe.

"Investing into the future extraction of hydrocarbons certainly locks in future emissions," he said.

Woodside and partner BHP Group insist the new project will help customers across Asia to move away from coal, and will be less polluting than other giant gas export projects in Australia.

Both companies advanced in early trading on Tuesday (Nov 23) in Sydney, with Woodside rising as much as 4.3 per cent.

Still, the venture carries an enormous climate footprint. Campaigners estimate direct carbon dioxide emissions will be about 4.4 million tonnes a year and that figure swells to 56 million tonnes if the burning of the gas by consumers, or so-called scope 3 environmental impacts, are included, the Australia Institute think-tank said in a June report.

Australia's LNG boom in the past decade saw companies from Chevron Corp to Royal Dutch Shell pump about US$200 billion into mega-projects that transformed the nation into a key exporter. Now there's a rising challenge in the seaborne market from Qatar and the United States.

"Woodside is not the only LNG player looking to take advantage of rising prices and strong demand," Mr Toleman said. "Over the next 12 months, we expect several low-cost projects to move towards sanction." 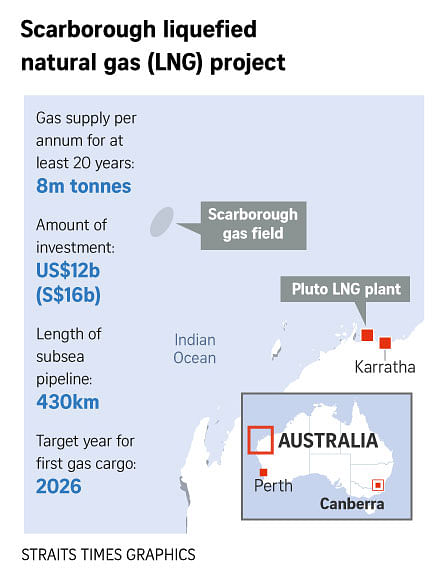 The outlook for natural gas will depend on how quickly national climate pledges are put into action.

Consumption of natural gas would be about 25 per cent higher by 2050 based on a continuation of existing policies, while demand would peak in 2025 and slowly decline if nations follow through on their promised commitments, according to the International Energy Agency.

Key LNG consumers including Japan and South Korea have already flagged the will need to curb imports in the decades ahead to meet targets to zero out emissions.

BHP and Global Infrastructure Partners LP, which this month agreed to buy a 49 per cent stake in the Pluto Train 2 part of the development, are backing the view that gas demand will remain firm as the world decarbonises.

In a sharply criticised plan on how it will achieve net-zero emissions, Australia's government also endorsed that outlook, forecasting the nation's earnings from gas exports will rise 13 per cent by 2050.

The new Woodside project is likely to continue into the 2050s and add at least A$125 billion (S$123 billion) to gross domestic product, Australia's Resources Minister Keith Pitt said on Tuesday in a statement.

Australia says it will sell coal for decades into the future