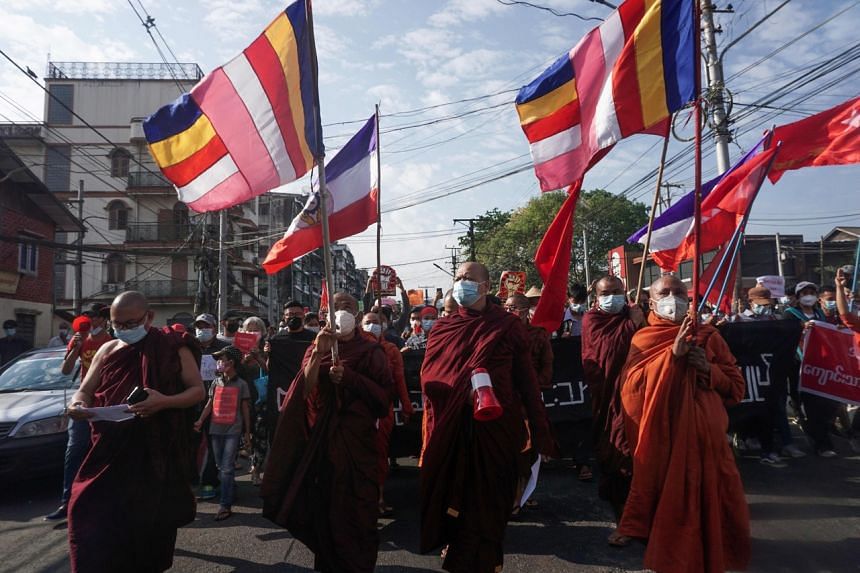 Myanmar's civil disobedience movement was pulling in thousands of people in towns and cities across the country, signalling impending measures could be in the offing to stifle the mass demonstrations.

Tens of thousands of people, including monks, joined the protests over the weekend to denounce the sudden military coup. In capital Naypyitaw, thousands of people urged police to serve people, not the military. At one spot, police had put up a sign saying live ammunition could be used.

The government's move to lift the ban on the Internet over the weekend prompted even more anger in the country. The United Nations has called for a restoration of democracy but in Myanmar, the military seemed set to maintain its rule through 2021.

Myanmar's coup conundrum: Asia, and the world, grapple with the dilemma of dealing with Yangon

Washington in a conundrum over Myanmar

Instability in neighbour not good for China

Myanmar set to create a headache for Asean once more 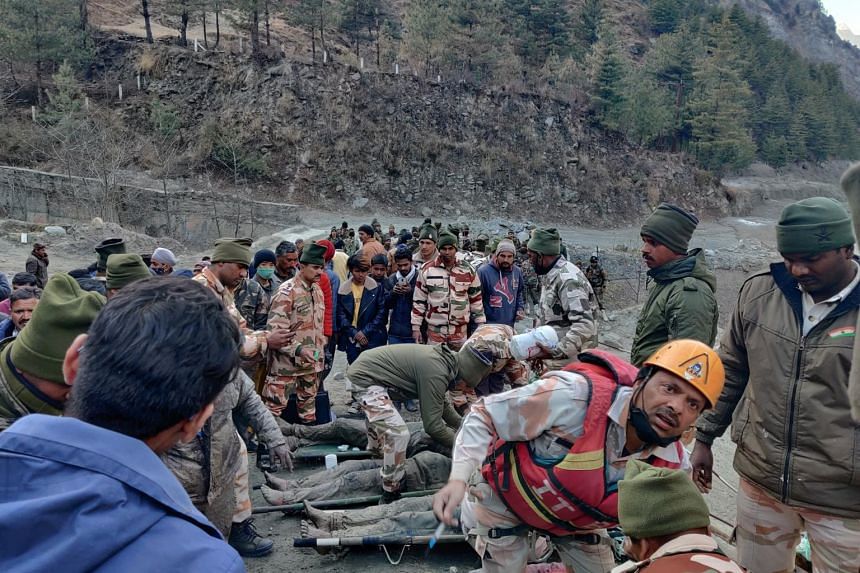 Around 200 people were missing while 18 died after a huge chunk of a glacier in the Indian Himalayas dislodged, causing flash floods and washed away one of the main roads, in one of Uttarakhand's districts.

The floods destroyed a small hydroelectric project called Rishiganga and affected another one further downstream. Most of the people affected were working on the two projects.

A team of scientists were flown to the region to investigate although reasons for the disaster were not immediately known. Apart from global warming and the construction of the two hydroelectric dams, others said that there could have been water pockets, or lakes, inside the glaciers that burst resulting in the disaster. 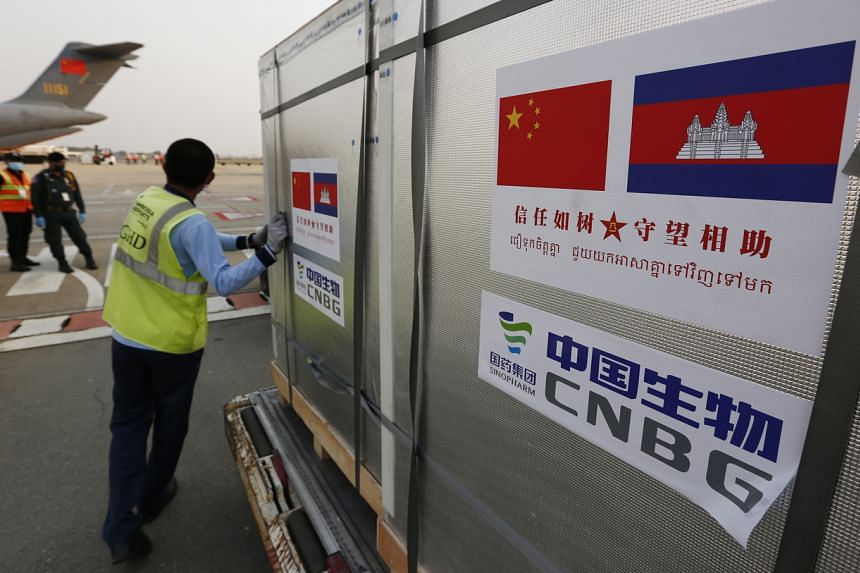 Frontline heroes, moving scenes, words of hope - all these feature prominently in Days and Nights In Wuhan, a new state-sponsored documentary on China's fight against the Covid-19 pandemic, that was released last month to coincide with the anniversary of the 76-day lockdown of Wuhan.

The 90-minute movie is a positive spin on China's efforts to contain coronavirus. It praises the sacrifices of the Chinese people while avoiding mention of the government's missteps - and is the latest effort to tell the country's Covid-19 story to the domestic audience, writes China Correspondent Danson Cheong.

In some ways it is also a response to pressure from Western nations that have drawn attention to the mishandling in the initial stages. But while it is finding viewers in China, Beijing's efforts to reshape the narrative of the pandemic has had less success abroad.

Where did coronavirus come from? WHO scientists uncover fresh clues 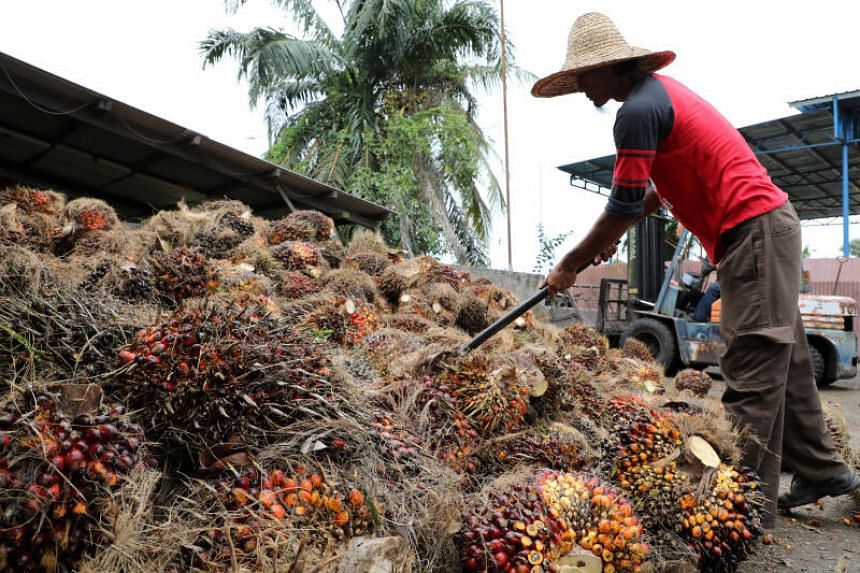 Major palm oil buyers were looking to block palm oil supplies from two well-known companies - FGV Holdings and Sime Darby Plantations - after the US banned imports from them, following allegations of forced labour in the production process.

The measures will affect supplies from the two companies to Europe, Australia and Japan, besides the United States. FGV Holdings and Sime Darby Plantations are two of the world's biggest palm oil producers.

The oil has several uses - it is used in food, cosmetics, animal feed and bio-diesel, among other things. And that from Malaysia is considered more sustainable compared to palm oil from Indonesia. Production from the two countries accounts for nearly 85 per cent of world production.

Philippines to discuss VFA with US 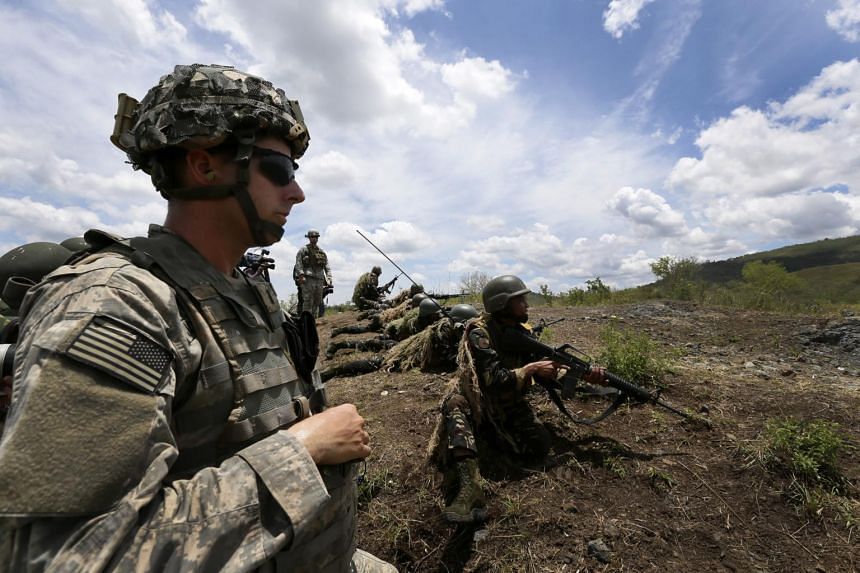 The Philippines is set to meet the United States this month to discuss the Visiting Forces Agreement (VFA) that allows American forces to operate on a rotational basis in the country. In November, Manila suspended its decision to terminate the VFA for a second time and President Rodrigo Duterte has said he was looking forward to discussing differences with the Biden administration. 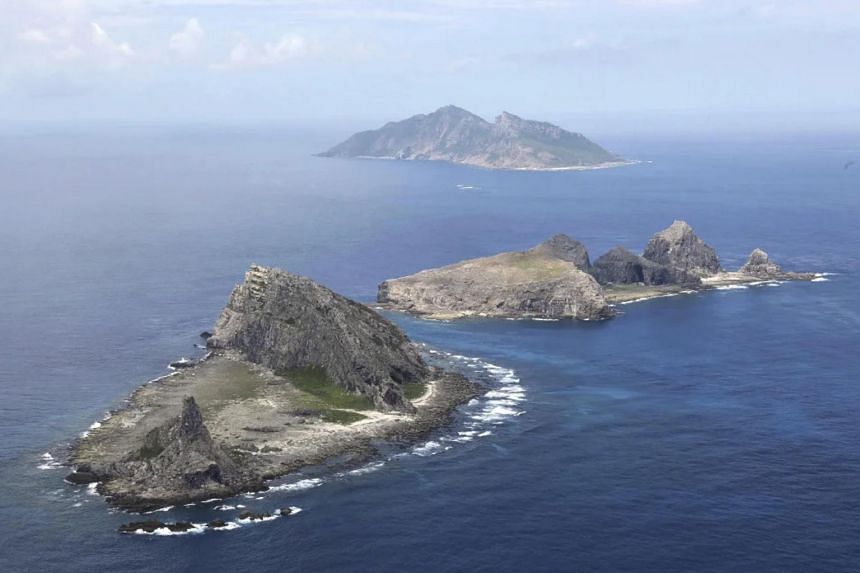 Japan protests China ships incursions off disputed isles: Japan today objected to two incursions by Chinese ships in Japanese territorial waters that come after Beijing enacted legislation toughening its response to violations of its maritime territory. The waters are disputed. China's new legislation allows its coast guard to use weapons against foreign ships that Beijing sees as illegally entering its waters.

Seoul launches Covid-19 tests for pets: Pet cats and dogs with a fever, cough or breathing difficulties will be offered coronavirus tests to check if they have been exposed to carriers, the Seoul metropolitan government said today. It was launched just weeks after the country reported its first case of Covid-19 infection in an animal, involving a kitten.

That’s it for today. We’ll be back with you tomorrow and thanks for reading.