PORT MORESBY (REUTERS,AFP) - Wide differences between China and the United States dominated an Asia-Pacific Economic Cooperation (Apec) summit in Papua New Guinea on Sunday (Nov 18), with little evidence of consensus as officials struggled to frame a closing statement acceptable to all.

Competition between the United States and China over the Pacific was also thrown into focus with Western allies launching a coordinated response to China’s Belt and Road Initiative, promising to jointly fund a US$1.7 billion (S$2.34 billion) electrification and internet project in Papua New Guinea.

Tonga, on the other hand, signed up to the Belt and Road and won deferment on a Chinese loan, a Tongan official said.

US Vice President Mike Pence, as he left the Papua New Guinea capital of Port Moresby, listed US differences with China, a day after he directly criticised its Belt and Road programme.

"They begin with trade practices, with tariffs and quotas, forced technology transfers, the theft of intellectual property. It goes beyond that to freedom of navigation in the seas, concerns about human rights,” Pence told reporters travelling with him.

China's foreign ministry said on Sunday (Nov 18) that no developing country would fall into a debt trap simply because of its cooperation with Beijing.

Chinese Foreign Ministry spokeswoman Hua Chunying made the comment in an online statement responding to remarks made by Pence a day earlier. "No developing country will fall into debt difficulties because of cooperation with China," Hua said.

Pence on Saturday warned smaller countries not to be seduced by China's massive Belt-and-Road infrastructure programme, which sees Beijing offer loans to poorer countries for construction and development projects.

The "opaque" loans come with strings attached and build up "staggering debt" for poorer countries, Pence charged, mocking the initiative as offering a "constricting belt" and a "one-way road".

He urged nations to stick with the United States, which doesn't "drown our partners in a sea of debt" or "coerce, corrupt or compromise your independence".

Differences over trade were making it difficult to draft a summit communique that members would sign, with Chinese officials rebuffed in an attempt to meet Pato on the issue.

Pato confirmed to Reuters that Chinese officials had wanted to see him, adding they had not made “necessary arrangements”for a meeting. He said the multilateral trade system was the sticking point in drafting the communique.

“If there are last minute issues then, like what we’re doing now, we will talk through them and try and reach a compromise,”he said.

Three sources with knowledge of the situation told AFP the police were called when Chinese officials attempted to "barge" into Pato's office on Saturday.

The Chinese delegates "tried to barge in" to his office on Saturday, in an eleventh-hour bid to influence a summit draft communique, but were denied entry, the three sources said.

At a Pacific Islands Forum in September, there was a similar dispute when China’s envoy demanded to be allowed to address the forum before the prime minister of Tuvalu.

Wrapping up a two-day summit here, leaders from the 21 Asia-Pacific nations will strive to craft a statement on the uncontroversial parts of their agenda - pushing for deeper regional economic integration.

The speeches on Saturday from Chinese President Xi Jinping and US Vice-President Mike Pence appeared to represent competing bids for regional leadership.

In a speech to business leaders just minutes before Pence, Xi insisted the initiative was not a "trap" and there was no "hidden agenda" - amid criticism that it amounts to "chequebook diplomacy" in the region. 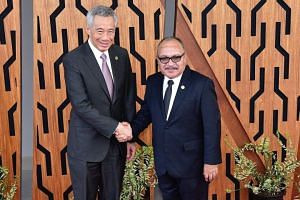 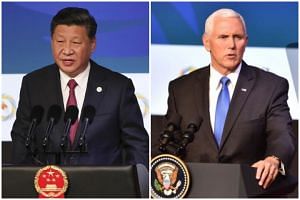 And Xi lashed out at "America First" trade protectionism, saying it was a "short-sighted approach" that was "doomed to failure".

The feisty barbs on a gleaming white cruise ship moored in Port Moresby set the scene for a potentially fiery meeting between Xi and US President Donald Trump at the G20 summit in Argentina at the end of this month.

But Xi and Pence, both resplendent in shiny red patterned shirts provided by the Pacific island did have a brief tete-a-tete on Saturday night at the leaders' gala dinner.

However, some voiced concern about the growing rivalry for influence in the region amid fears that a trade war between the two rivals could cripple the Pacific Rim economy.

"Business leaders do not want to speak out, but behind the scenes here, they are talking over dinner saying 'how has this happened'?" said Denis O'Brien, the billionaire CEO of Digicel.

"It's a very forced situation, one country is trying to force all the other countries to change tariffs agreed over years," O'Brien told AFP.

Xi has been the star of the show, front and centre at the official photos whereas Pence has kept a lower profile, only deciding at the last minute to stay in Port Moresby overnight - shelving original plans to fly in and out from Cairns in Australia.

With the official business of the summit relatively low-key, much of the focus has been on the unlikely venue of Port Moresby, which is hosting its first international event of this scale.

The city is on lockdown with hundreds of police and military patrolling the streets of the notoriously crime-ridden capital.

Warships are stationed just off the coast to provide security for the leaders, and delegates and media have been housed in enormous cruise ships due to a dearth of hotel rooms.

Apec host PNG is home to  eight million people, four-fifths of whom live outside urban areas and with poor infrastructure. 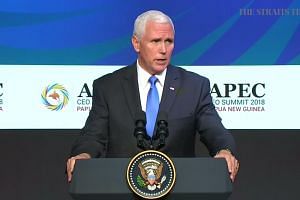 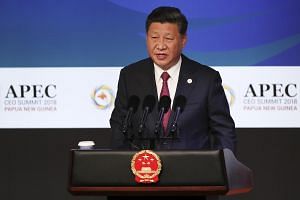 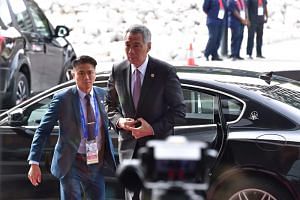 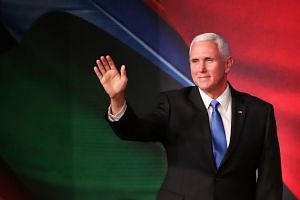 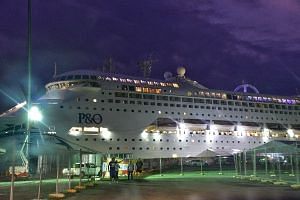 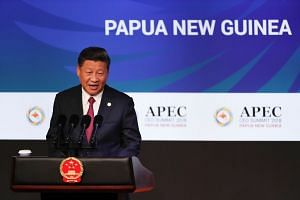 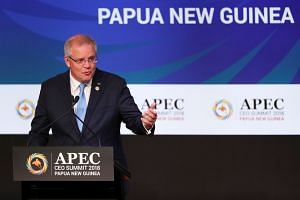