North Korea's Foreign Minister has slammed the United States for not reciprocating Pyongyang's goodwill measures to pave the way towards denuclearisation and peace on the Korean peninsula.

Mr Ri Yong Ho charged that the US has not focused on confidence-building and has instead been growing increasingly strident on maintaining sanctions.

"The DPRK-US joint statement should not be permitted to fall prey to American internal politics, inviting an adverse wind at odds with the intentions of the leaders," he said in a statement at the Asean Regional Forum yesterday.

He was referring to the joint statement between US President Donald Trump and North Korean leader Kim Jong Un at their June 12 summit in Singapore, which strove to usher in a new era of relations between the two sides.

It spoke of building a lasting and stable peace regime on the Korean peninsula, with, among other things, complete denuclearisation.

Mr Ri said the only practical way to move forward was to take a "new approach" of prioritising confidence-building, with both sides taking "simultaneous actions and phased steps to do what is possible one after another".

North Korea stands firm in its determination and commitment to implementing the joint statement, he added. 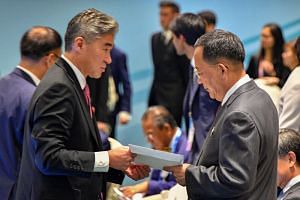 But, said Mr Ri: "What is alarming, however, is the insistent moves manifested within the US to go back to the old, far from its leader's intention."

He insisted that North Korea had initiated goodwill measures such as the moratorium on nuclear testing and the dismantling of a nuclear site. The US has, however, responded by "raising its voice louder" for maintaining sanctions against North Korea, and was "showing the attitude to retreat even from declaring the end of war, a very basic and primary step for providing peace on the Korean peninsula".

The 1950-1953 Korean War was halted only by the signing of an armistice, and has not been replaced by a peace treaty.

Mr Ri added that his country was focused on economic construction and to achieve this needs a peaceful environment.

"The international community should respond to our goodwill measures already taken for denuclearisation with constructive steps that would encourage and promote peace and economic development of the Korean peninsula," he said.